There was clapping and cheering and a host of cheerful faces when our oriented strand board plant in Edson, Alberta, achieved a significant milestone in the early morning hours of Nov. 17. The team had just run its 4 millionth press load — the critical step that squishes a massive mat of loose wood fibers into a solid board.

“That’s a lot of OSB,” says Jason Krywulak, process technician. “With 72 panels in each press load, 4 million loads is enough for more than 884,000 homes — and enough to circle the globe several times over.”

Jason works in the control room, where he and other process technicians oversee the mill’s end-to-end operations. A self-professed “numbers guy,” he was tasked with tracking progress toward the milestone.

“It’s not something you achieve every year like an anniversary,” Jason says. “It speaks not just to our ability to adapt and keep improving, but also to our longevity.”

Indeed, the milestone was 38 years in the making.

On Oct. 7, 1983, Dave Byzuk, mobile shop lead, witnessed the mill’s first press load. Everything was so new the team wasn’t quite sure how long to leave the press running.

“We left it in a little longer than the recipe called for due to thickness and some other assumptions,” Dave says, who was one of the mill’s first employees. “It turned out perfect.”

That first board was cut into panels, and the team signed two to commemorate the occasion. It was a big moment for Edson — both the mill and the town. The plant was the first OSB facility in Canada and promised to become one of the community’s largest employers.

The mill was built by Pelican Spruce Mills Ltd. and Al Owen, an Edmonton-based entrepreneur. In those early days, the mill focused primarily on sheathing panels. But things started to change in late 1988 after Weyerhaeuser bought the facility. 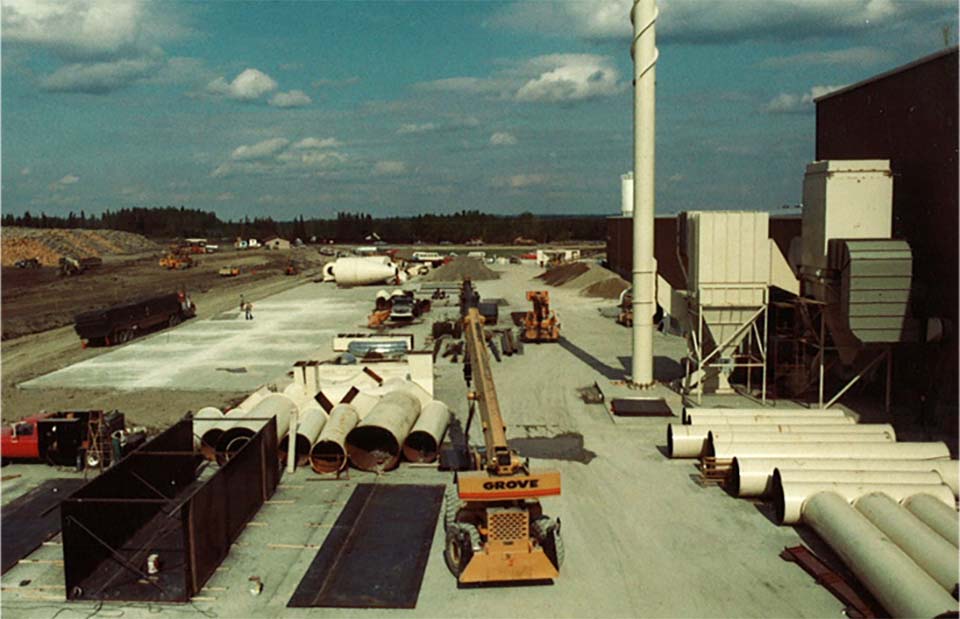 Edson OSB during construction in 1983. It was Canada’s first OSB plant.

Around 1993, the mill’s product focus started to change, too, when Wood Products introduced Edge and Edge Gold enhanced OSB flooring panels. To accommodate overwhelming market acceptance throughout North America, Edson added a third dryer and made other capital upgrades in the mid-1990s.

But the most notable change came a few years later when the plant shifted from powder to liquid resins. Resins are the glue that binds wood strands together to make OSB. They’re activated when the press compacts and heats them. Liquid resins spread more evenly and dry faster, allowing the mill to boost productivity.

Over the next several years, other process and capital improvements enabled the Edson team to double output over the mill’s original specifications and compete against newer mills twice its size.

But even with many significant changes over the years, some things have stayed the same. 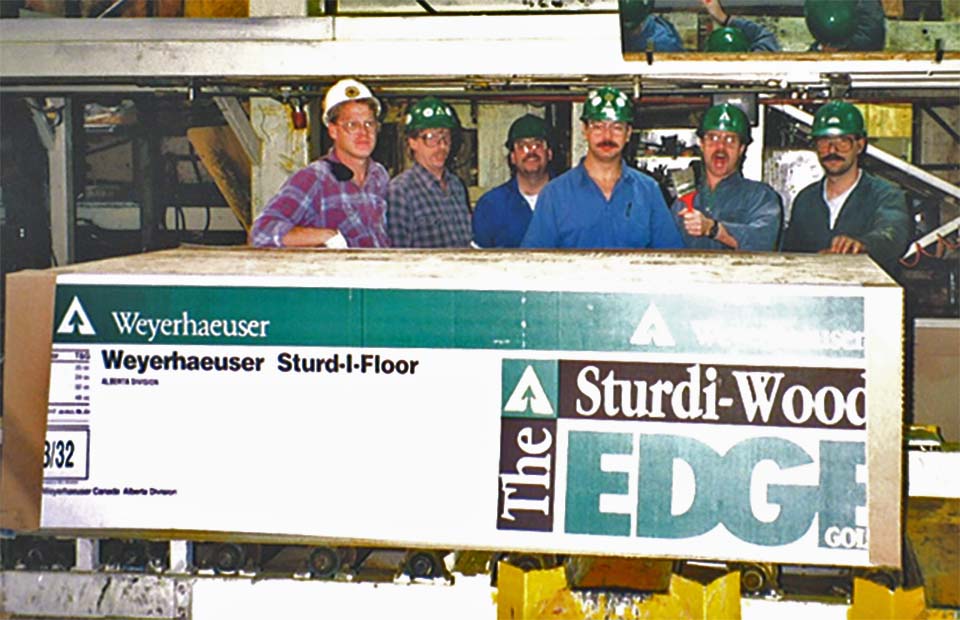 The first bundle of Edge Gold enhanced OSB floor panels rolled off the line in the early 1990s.

“In 2018, we gave Al Owen a tour for the mill’s 35th anniversary,” says Harry Quinn, construction and capital manager. “There was so much he still recognized: the press, the burners for the dryers, the forming heads. It was pretty emotional for him to see that a lot of what he built was still keeping people employed.”

Today, the mill employs about 150 people who work hard every day to improve productivity. Trimming a few seconds, or even a fraction of a second, here and there adds up over time.

The team is also looking forward to more capital improvements in the years ahead, including upgrading the press’ hydraulic system from water to oil based, which will improve recovery times between press loads, or “squishes” as they’re affectionately called.

“We’re all about finding ways to speed things up without decreasing the quality of the board,” says Michelle Blais, process technician, who joined the Edson team six years ago. As a relative newcomer, one of the first things she noticed was the team’s willingness to help each other.

“Whether it’s safety or training someone to step into a new role, we all take care of each other,” Michelle says. “We all want each other to be successful.”

JOBS, COMMUNITY AND A SPECIAL TEAM

The team works hard to keep the mill running 24 hours a day, seven days a week — except every other Wednesday when it stops for planned maintenance. But they also take time to give back to the community.

And the community joined in the celebrations for the mill’s 4-million-presses milestone. Community leaders toured the mill and congratulated employees as part of a two-week celebration (staggered in shifts due to COVID-19 protocols) that also included crew breakfasts and discussions about team and community.

“This milestone is a testament to every employee who’s worked here over the years,” says Natalie Peace, plant manager. “The team looks out for each other and the site. They keep things safe and reliably running, and they’re constantly learning and improving. Everything they do, they do with pride.”

That pride shines through in employees such as Joe Mark, maintenance tradesman, who plans to retire at the end of the year. Even in retirement, Joe expects to keep an eye on the mill.

“I’ll be looking for plumes of water vapor rising into the sky from the chimney stacks,” Joe says. “When I see that, I’ll know that everything is running well. I’ll remember all the good people who make a quality product from sustainably sourced wood. And I’ll be thinking about the mill’s longevity and how hard everyone is working to be a fixture in Edson for years to come.”