During the summer of 1922, a customized Northern Pacific Railway Company train called the Weyerhaeuser Forest Products (WFP) Special carried a group of salespeople and managers from St. Paul, Minnesota to manufacturing mills in the Northwest. About 80 people were on board the WFP Special during the three-week journey.

The purpose of the expedition was to inform and educate the salesman about the manufacturing mills and products so they could better serve their customers. They documented their journey and what they learned in a newsletter called the Salesmen’s Log, published en route. 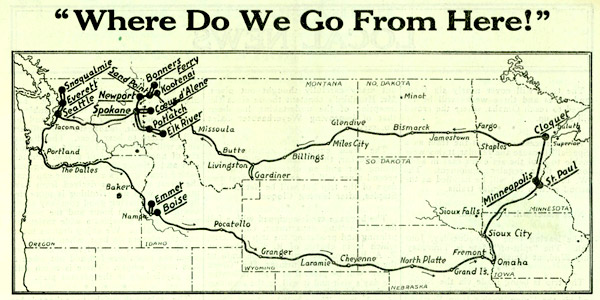 The route the train would take that summer.

The group left St. Paul – Minneapolis, Minnesota on June 29 after a visit to the Twin Cities wholesale distribution yard. They noted that the yard was “designed and constructed with two things in mind: reduction in handling costs and speeding up shipments.”

Of primary concern to more than 35,000 retail lumber dealers in the United States is the question: ‘Where can I find a mill that will give me what I want in the least possible time?’ If your order is for Northern Pine, the answer is ‘Place it with the Cloquet Mills.’ Thirty-five years of experience in cutting timber into lumber has taught them how best to meet the current demand.

Heading west, the group spent two days in Yellowstone Park, after which everyone “settled down to two solid weeks of hard work.” By July 5 the group reached Idaho and visited four more affiliated companies.

There is a lot to this business of manufacturing logs into lumber – a good deal more than most people suspect. Talk to a good saw-mill man about it and he will tell you that the real science of lumber manufacturing lies in producing from the timber the highest quality and greatest quantity of merchantable lumber which when sold will net the greatest return on the log.

The first mill visit in Washington was at Snoqualmie Falls on July 14. The plant was recognized as one of the “largest and most modern lumber manufacturing units on the Pacific coast,” with every operation driven by electricity rather than by steam.

The use of electric donkeys in logging is the innovation of the Snoqualmie Falls Lumber Company. They first experimented with this type of motive power when they used it in clearing their mill site. This demonstrated to them the practicability of using the engine in actual logging operations. The use of electricity has proven an economy. The chances of starting a forest fire, always present in the use of steam donkeys, is eliminated at Snoqualmie. 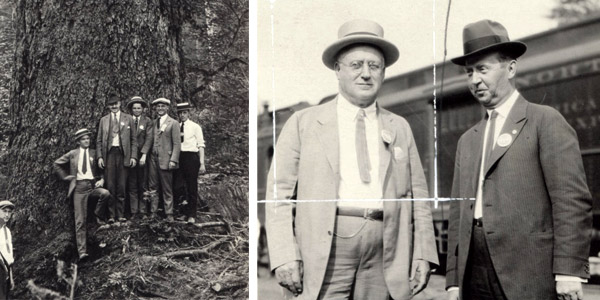 On July 15 the group visited Weyerhaeuser Timber Company’s mills in Everett. Mill “A” was the company’s first manufacturing plant, purchased in 1902. Mill “B” was built in 1914 and was “unquestionably one of the largest mills in the world.” The salespeople were impressed by the mills’ foreign markets:

Cargo shipping by the Weyerhaeuser Timber Company is a practice as old as Mill “A,” which has a dock on deep water and loading space to accommodate three of the larger type boats… Japan, Australia and the countries along the western coast of South America are all good customers of Weyerhaeuser Timber Company. Rough lumber sent to these countries approximated 30,000,000 feet in 1921, and would have been considerably larger had foreign exchange conditions been more favorable.

The group then returned to Idaho to visit another affiliated company. Here the salespeople discussed grading:

It would surprise you to see the infinite care and attention given to the matter of grading at the Weyerhaeuser mills. The graders here are all experienced, long-time employes. They’ve been grading Weyerhaeuser lumber for years, and they know the Weyerhaeuser standard of living up to Association rules. 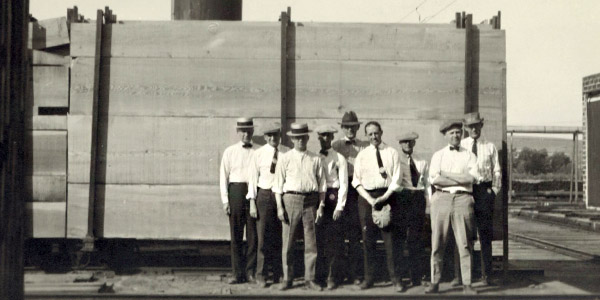 The last issue of the Salesmen’s Log, dated July 22, found the group homeward bound. One salesman summarized his impression of all the mill visits:

I could sense that accumulation of experience in most everything I saw. In the way they routed the lumber through the mill, scarcely touching it by hand; in the care they used in grading it; in the various ways they seasoned the different species; even in the way they loaded the cars. Somebody told me once that all lumber was alike. Nature made it; lumbermen only cut it up. The man who said that didn’t know what he was talking about. I could prove to him that there are thousands of ways to make lumber better than the ordinary run of stuff. I saw our men doing it in each of our mills.

A few cartoons from the journey’s newsletter.

The Hole Truth: How to Properly Place, Cut and Drill Holes in TJI’s