“I was skeptical that I could be a firefighter, because it seemed far too physically challenging,” Jessica says. “I thought I’d never pass the gear test, but I was motivated to follow in my father’s footsteps, so I trained hard. Getting my ‘red card’ and joining ODF was a huge accomplishment. I would tell anyone who’s interested in firefighting to give it a shot. You might surprise yourself.”

As part of our Fighting Fires Together campaign, we’re featuring stories of our employees who have served on the front lines fighting fires.

In September 2020, wildland firefighter Jessica Dally and the John Day Helitack Crew were stationed in eastern Oregon when the Holiday Farm fire started near her hometown, six hours away. Her father, a firefighter with the Oregon Department of Forestry, was on the front lines of the fire. Her mother was evacuating their family home.

“It was excruciating, but we had to stay put in case fires started at out location,” Jessica says. “By the time we were finally dispatched to the westside to help, the smoke was so thick we couldn’t use our helicopter — it was grounded for weeks at the Salem airport. Instead, our small helitack crew was sent out to help the engines dig handlines through people’s backyards to protect their houses. I’d go home with my face covered in ash, coughing up black muck.”

Jessica got a call from the mother of her childhood best friend, whose home was in the path of the fire. She begged Jessica to find a way to help her.

“She was hysterical and couldn’t understand why it wasn’t possible for us to fly in and protect her home,” Jessica says. “Sadly, there was nothing I could do, and they lost everything. There’s no rhyme or reason to a fire — it takes some homes and leaves others perfectly intact — but I felt terrible. Firefighters feel responsible for our communities. There’s an immense pressure to be the hero who saves the day.” 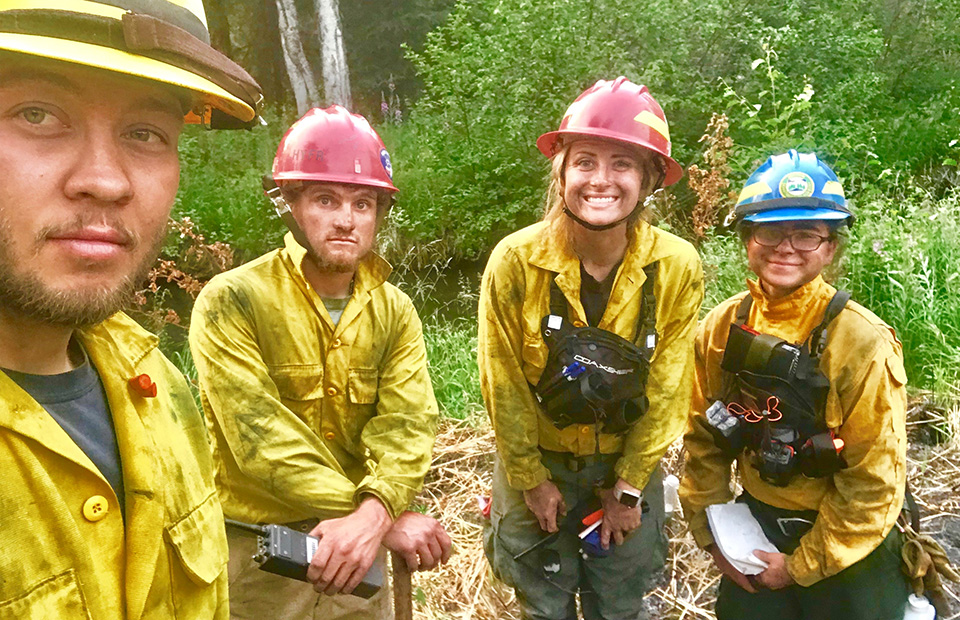 Firefighting gave me thick skin, one hell of a sense of humor and plenty of grit,” Jessica says. “I have a newfound confidence and strength I never thought was possible. It makes me feel like I can face any challenge head-on, even if I’m doing tough work like an audit in the bottom of a canyon.”

By the time the 2020 Oregon wildfires were extinguished, 11 people had died, hundreds of structures were lost, and more than a million acres of land were burned, including portions of our Snow Peak, Springfield and Clackamas tree farms.

Jessica, now a professional development forester with Weyerhaeuser based in Dallas, Oregon, was glad she could contribute to the efforts to contain the fires — but work that hard can take its toll. She explains that firefighters often experience a rollercoaster of emotions throughout the year, riding an adrenaline high during fire season before reaching a low point in the dark, cold winter months.

“As grueling as it can be, firefighting is fun, and it made me feel needed,” Jessica says. “When the off-season came, our tight-knit crew disbanded and suddenly that feeling was gone. Many seasonal firefighters live off unemployment or work unfulfilling jobs in the off-season. Some fall into a depression. I was lucky I had school to distract me.”

When Jessica and her twin sister were looking for ways to pay for college in 2017, their father encouraged them to become wildland firefighters. Jessica spent one season on an engine crew while attending Oregon State University, then joined the John Day Helitack Crew, flying all over the state on a small four-person helicopter to put out blazes.

“We’d get dropped off in remote places fire engines can’t reach, directing water dumps and camping out to make sure fires went cold,” she says. “Once the fires were contained, we often had to hike back to civilization, weighed down by up to 60 pounds of gear. It was intense, but I loved it.” 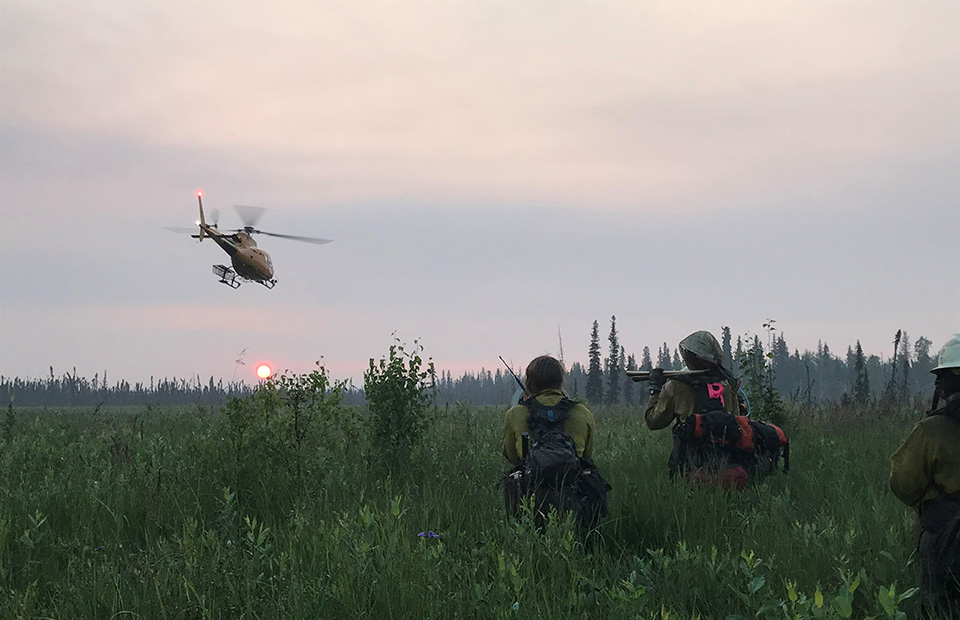 “My job as a forester can be hard — I get wet, hot and scratched up, and it’s physically demanding, but I’ve learned I can handle it all. Firefighting taught me how to take care of myself physically, and how to be safe in dangerous conditions. Those are important skills to have in this career.”

HOLDING ON DURING THE OFF-SEASON

To the community, Jessica and her fellow firefighters are heroes. They’re tearfully thanked in grocery stores, and grateful citizens pick up their bills at restaurants and diners.

“That appreciation gave us all a highly motivating sense of purpose,” Jessica says. “But it disappeared in the off-season when I was back to looking like an ordinary college student. I’m five feet tall and 125 pounds, so nobody ever guessed I was a firefighter. It felt like I had a hidden superpower.”

Getting a job as a Weyerhaeuser forester restored the sense of purpose that Jessica lost when she decided her firefighting career was over. It also gave her a new appreciation for fire mitigation strategies such as controlled burns and brush management.

“We need to reduce the pressure on firefighters by pouring resources into fuel breaks, defensible space and maintaining more separation between populated areas and forests,” she says. 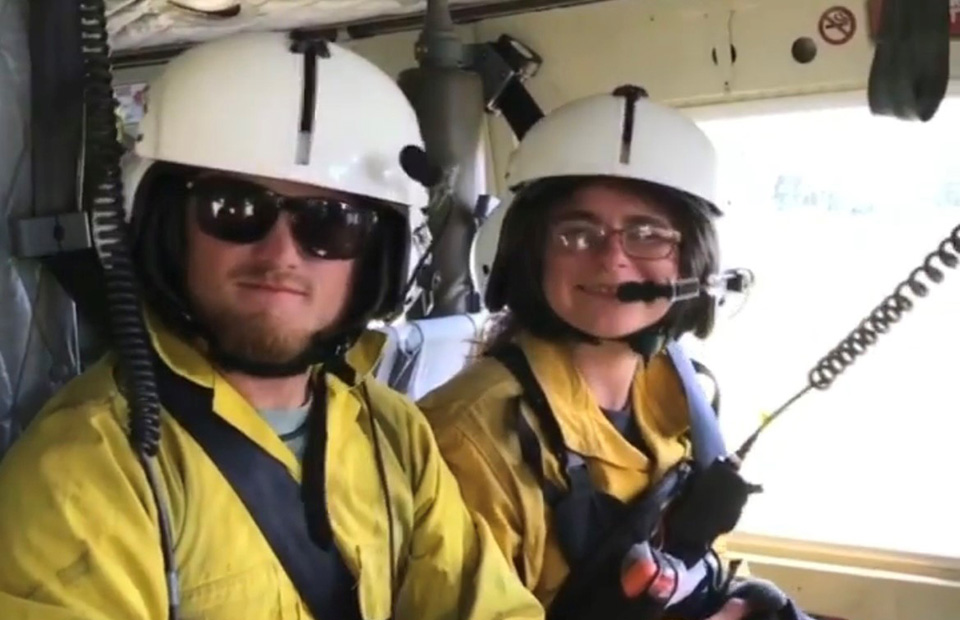 “Firefighting left me craving the thrill of adventure and camaraderie. I find myself treating my coworkers like my old fire crew, which makes working fun.”

HOW YOU CAN HELP

If you want to help wildland firefighters in your area, Jessica says let them know you care. Donate meals, send handwritten thank-you cards and offer free services if you can.

But she believes the first step toward improving the mental health of firefighters is simply to talk about it.

“Destigmatizing discussions about mental health would go a long way, as would providing access to affordable services,” she says. “It wasn’t something my crew really talked about openly, and I hope that will change.”

As Internal News Editor, Malissa Webber Helps Capture Our Weyerhaeuser World One Story at a Time