With its gables, metal roof and rustic wood siding, it’s easy to see how Stott Architecture’s custom home in Sagaponack, N.Y., emulates the barn-like shapes characteristic of eastern Long Island. But a deeper look reveals thoughtful details delivering both sustainability and drama that make this much more than a typical barn-style home.

In designing the 7,500-square-foot house, Ric Stott, AIA set out to create a modern take on the potato barn, which features a similar look to traditional barns but is typically built into the ground and often features structural columns. The front elevation plays on the characteristic barn appearance, with two parallel rectilinear structures, gable-roofed wings connected by a perpendicular entrance hall. An attached three-car garage carries the theme on the other side with industrial-style doors that give an additional nod toward the contemporary.

An in-ground lower level, which emerges into an open and airy subterranean courtyard, draws directly on Stott’s potato barn inspiration, making use of the natural heating and cooling properties of the earth. The design is in keeping with the energy-efficiency goals of the rest of the house, which was sited and designed with passive solar principles to maximize radiant heat gain in the winter and reduce it in summer. The walls and roofs were built using SIPs panels, achieving an R-value of 36 and 47, respectively. The house is expected to achieve LEED, NAHB, and Energy Star green certifications, among others.

On the interior, Stott translated the traditional barn beams into a more modern form with Weyerhaeuser Trus Joist® Parallam® PSL, both as a structural component and an exposed aesthetic element. “PSL was the perfect fit because it’s modern and sustainable, and it has the look of something big and beefy,” Stott says.

The strength and span capabilities of the PSL beams were called upon in numerous ways, including as ridge and rafter beams supporting the SIPs panels and the ridgeline skylight arrays that flood each wing with light. The PSL rafter beams tie into PSL columns using heavy-duty exposed connections that further the rustic-modern feel.

In the two-story master bedroom, for example, Parallam columns support 12-foot-long 3-1/2” by 9-1/2” 2.0E Parallam rafter beams, with two 12-foot-long 3-1/2 by 11 7/8” 2.0E Parallam beams framing the sides of the skylights along the ridge. In addition to the skylights, the gable end made with a Kalwell translucent wall system brings in daytime light while contributing to an evening glow on the exterior.

PSL beams frame the second-level floor system, a catwalk-like open-air hallway that connects the upper bedrooms through the entrance hall to a hay-loft-inspired study above the kitchen on the opposite end of the house. The exposed framing includes a Parallam beam that spans the width of the kitchen. The massive beam supports the loft without need for columns that would interrupt the flow from the kitchen into the living room.

Similarly, the walkway above the entrance wing uses Parallam beams with support from columns framing the staircase, helping ensure a clear view from entry door to the opening glass walls at the rear. The exposed three-story stairwell continues the flow, with Parallam stringers and open mahogany treads carrying the wood theme through and tying the look from floor to ceiling and level to level.

The mahogany, the only other wood used throughout the house, carries over to the exterior, where it was used for the wood siding in combination with stucco applied directly to the SIPs panels. Further emulating the potato barn aesthetic are a series of columns transformed into opaque lanterns that glow translucent after dark. 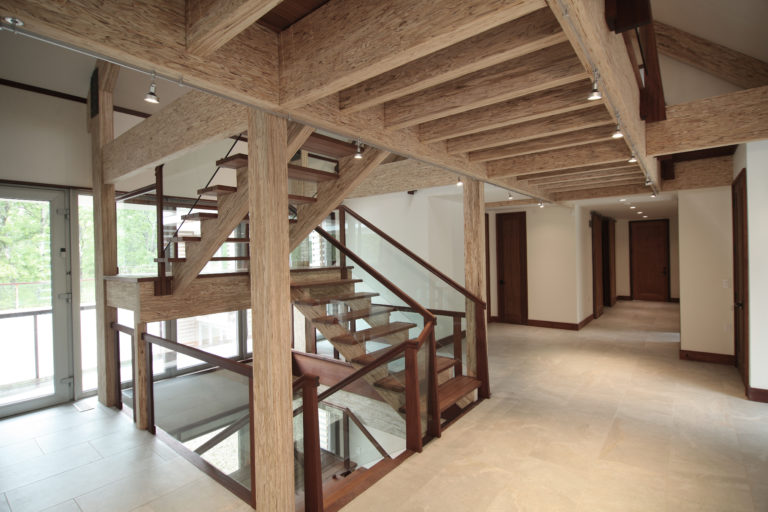 Indeed, light during day and night is a key contributor to the home’s dramatic views. Rooms throughout the rear of the house feature large glass walls that open onto multiple balconies, decks, and the courtyard. Combined with the skylights and translucent panels, the elements ensure ample daylight and a strong, continual connection to the outdoors.

The wooded lot came with strict clearing restrictions, so Stott focused on creating an outdoor space no one would want to—or have to—leave. “We kept both the house and the site tight,” he notes. “We designed the house so a family can be there and go anywhere without having to go into the woods. They don’t have to go off the hardscape. It’s fun … it’s great for kids, and it’s great for parties.”

Stott’s mission to update the traditional barn style is evident from those outdoor areas through to the inside. Each element, from the gabled, translucent forms to the Parallam’s updated take on exposed timbers, simultaneously pays homage to history while adding a thoughtful and practical modern edge.

To see more images of this project, click here.