After 2020 Wildfires in Oregon, Dogged Work to Replant and Restore Our Forests Shows Encouraging Results

Earlier this year, a log truck full of fire-salvaged timber wound its way down the mainline road at our Clackamas, Oregon, tree farm. It was one of about 100 vehicles that carried 215 loads of wood out of Clackamas that day — possibly setting a haul record for the tree farm.

In a typical year Clackamas hauls about 40 loads a day during peak harvest season. But 2021 was anything but ordinary — not only for Clackamas but also for our Snow Peak, South Valley and Springfield operations.

All four tree farms suffered significant damage after nearby wildfires on state and federal timberlands encroached on our property in September 2020. After several weeks of grueling firefighting, the blazes were contained. In all, about 125,000 acres of our timberlands were impacted.

Though our teams were exhausted, they quickly pivoted from firefighting to replanting, salvage and recovery. 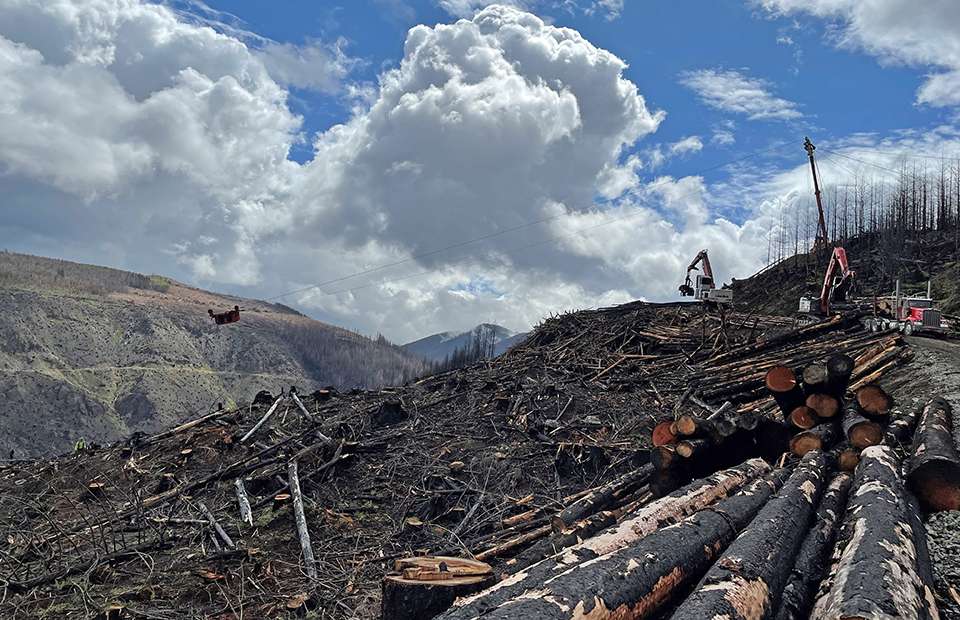 A tower logging crew operates on the fire-damaged slopes of our Clackamas tree farm in Oregon. Across the state, we’ve logged about two-thirds of our planned salvage harvest. The bulk of the remaining work is expected to finish next year.

​​​​“In mid-October, about 30 days after the burn, we were planting seedlings,” says Mark Allsup, a forester in Clackamas. “There was still smoke in the air from smoldering trees and soil, but we were back at it.”

Planting also resumed quickly in Springfield, South Valley and Snow Peak. Teams in all four locations prioritized streamside buffers and other environmentally sensitive areas. By winter, they were interplanting in non-salvageable stands before decaying trees became an overhead safety risk.

At the same time, salvage crews were recovering fire-damaged but marketable wood — a planning and logistical feat pulled off in a hurry. Existing harvest plans were tossed and new ones made on the fly.

The work required building and reinforcing logging roads and bringing in harvest contractors and equipment from across the state, as well as Weyerhaeuser engineers, inventory planners and contract supervisors from other areas and regions.

“My team doubled in size, scope and scale,” says Jim Neef, Springfield area manager. “We’ve even had log trucks come from out of state.”

In Clackamas, there were 22 contractor companies on-site at one point, about four times the typical number. 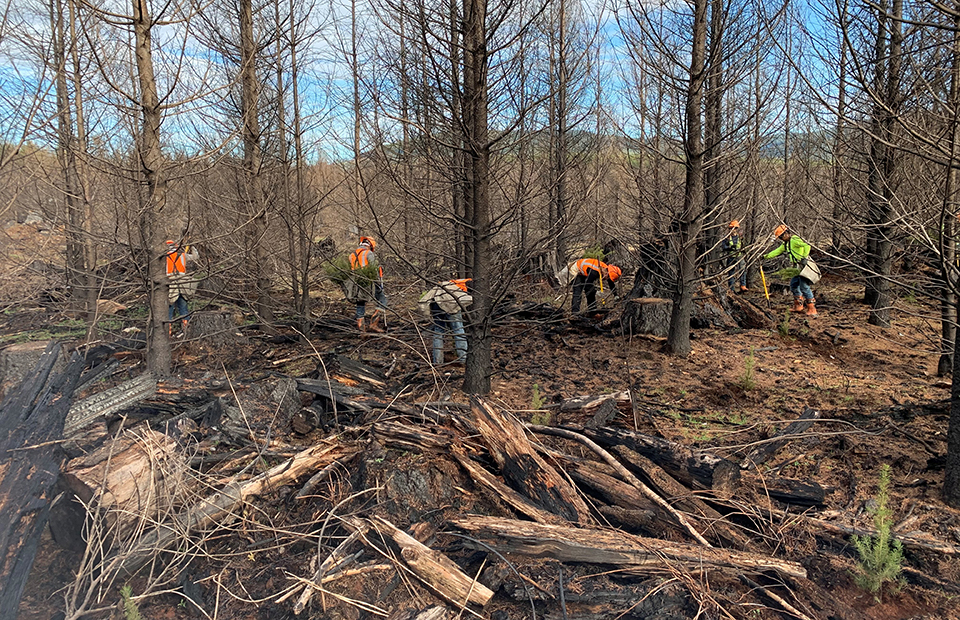 “So many people stepped up from all across Western Timberlands and our contractor community,” says Jill Bell, Snow Peak area manager. “If we had a trucking bottleneck, our transportation teams figured it out. If we needed a place to sell wood, our marketing teams found the customers.”

Today, our teams are about two-thirds of the way through the salvage process. They expect the bulk of the remaining work to be completed in 2022. But knowing exactly when it will finish is something of a moving target.

Not only are yarding crews that harvest steep slopes in short supply due to high demand across the state, but sometimes fire-stressed stands initially expected to live don’t make it and need to be salvaged. And if insect pests move into a stand, it needs to be harvested more quickly to mitigate their spread.

“This is a dynamic, evolving situation, and our teams and contractors have performed admirably,” says Steve McNulty, Willamette Valley region manager. “They continue to prioritize salvage work to recover whatever can be recovered, and we’re well on our way to returning to more normal operations in 2022.”

As for regeneration, nearly 8.5 million seedlings have been planted on more than 25,000 acres of fire-damaged property to date. Over the next four years, we plan to plant 35 million seedlings in all — about twice as many seedlings needed to replant after the eruption of Mount St. Helen in 1980. What’s more, we expect to complete the work almost two years faster than the replanting work in the Mount St. Helens blast zone.

Of course, all those seedlings have to come from somewhere.

“We’ve leaned on creativity and innovation to ramp up our internal seedling production,” says Jeff Mehlschau, regeneration lead for Western Timberlands. “It takes two years to grow a seedling, so we had to adapt fast.”

Without quick changes in seedling production, Jeff estimates that replanting of this magnitude would have taken 10 years, and for much of that we would have been forced to turn away external customers who depend on us for their own replanting needs.

“Our nursery and regeneration teams came up with 19 innovative ideas to increase seedling capacity, and we implemented nine of them,” Jeff says.

Those ideas included purchasing some seedlings from third parties and using our facilities to grow mostly second-year seedlings while contracting with other growers and greenhouses to get them started. We’re also transplanting seedlings more densely at the nurseries for their second growing season to produce more volume.

“We not only expect to have plenty for our own needs but also enough to continue sales to third-party customers,” Jeff says. “All the extra production came from innovation, creativity and determination.”