On Jan. 23, 2022, after years of sitting empty and unused on our timberlands just outside Crossett, Arkansas, the nine buildings of Yale Camp were on their way to a new location. Yale Camp, built in 1946 by Yale University, was one of the first forestry field education sites in the country, and moving these historical buildings to a city park where more people will be able to see and explore them was no small feat.

The four-mile move took seven hours, the help of 15 bucket trucks, and the entire community coming together. Each aging building, including the main hall with its massive stone fireplace and chimney, had to be carefully lifted off its foundation, secured on a trailer and pulled through town.

The move was masterminded by Joe Felsman, a planning/roads forester based at our Crossett Timberlands office, who usually plans where and how to build roads to access our timberlands.

“Yale Camp is an important piece of Crossett’s history,” Joe says. “Forestry students from all over the world have passed through it. Donating the buildings to the city is a big deal, and we’re so happy to do it while they’re still in good condition.” 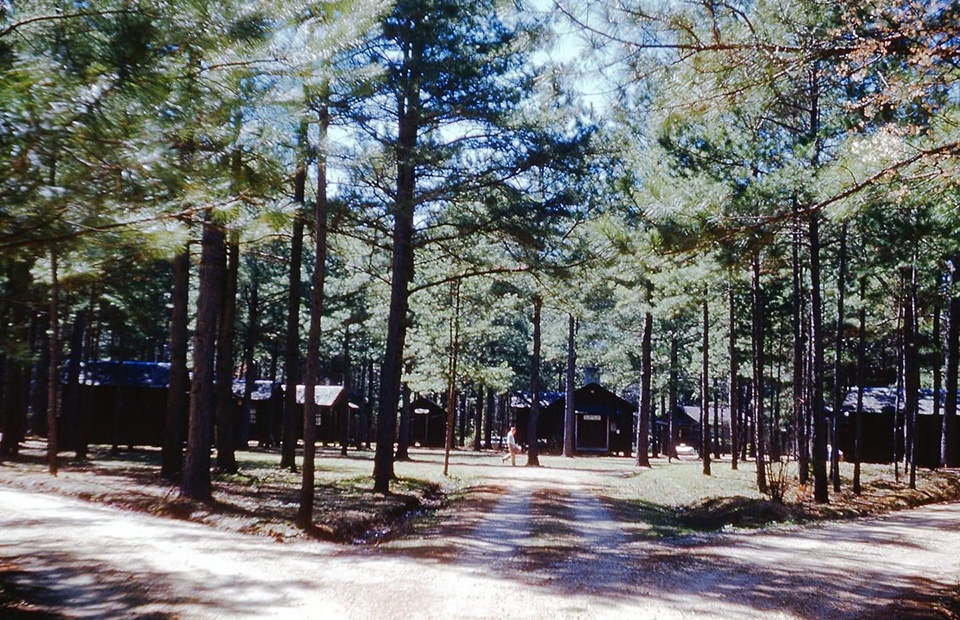 A photo of Yale Camp in the 1950s, when it was actively used by students from Yale University. 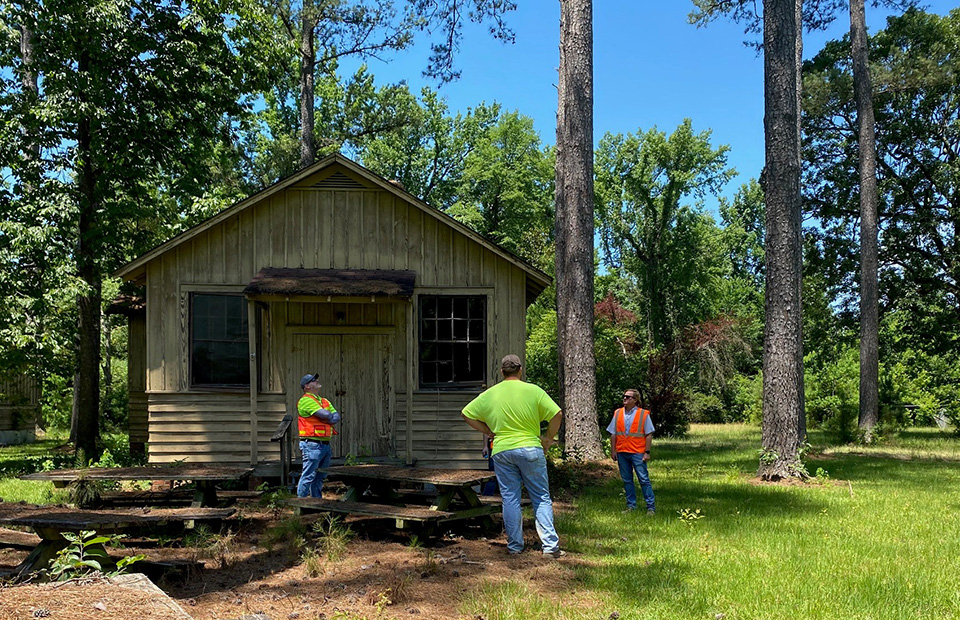 For decades, Yale Camp was run by the Yale University School of Forestry, which started sending students on hands-on spring field trips to the highly productive southern forests and sawmills in the early 1900s. For the first part of the century, Yale’s forest management students were hosted by a different lumber company each year. Then in 1946, Crossett Lumber Company offered the first permanent site for Yale students to stay during the annual trip, which had evolved into an 11-week field course.

The city of Crossett, born as a mill town and steeped in the history of the industry, was an ideal location for the camp. Students visited Crossett Lumber Company’s mills and timberlands, and its employees often served as guest instructors. Eight small buildings — teacher’s quarters, bunkhouses for up to 24 students and a shower house — were erected alongside a dining and lesson hall, which included an enormous central fireplace adorned with a blue Yale ”Y.”

The 10-acre camp was used consistently by the university until 1966. After that it was maintained by the companies that owned the timberlands around it — including Georgia-Pacific (which had merged with Crossett Lumber Company in 1962), Plum Creek and then Weyerhaeuser — and was occasionally leased to local Girl Scouts and other groups. 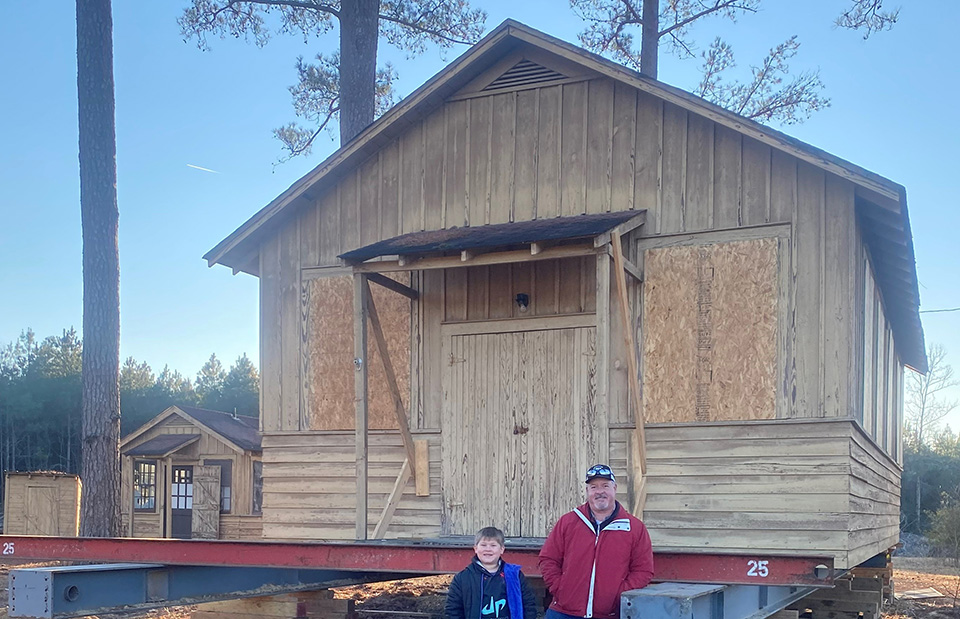 Joe and his 7-year-old son, John Henry, next to a building ready to be transported to its new home. 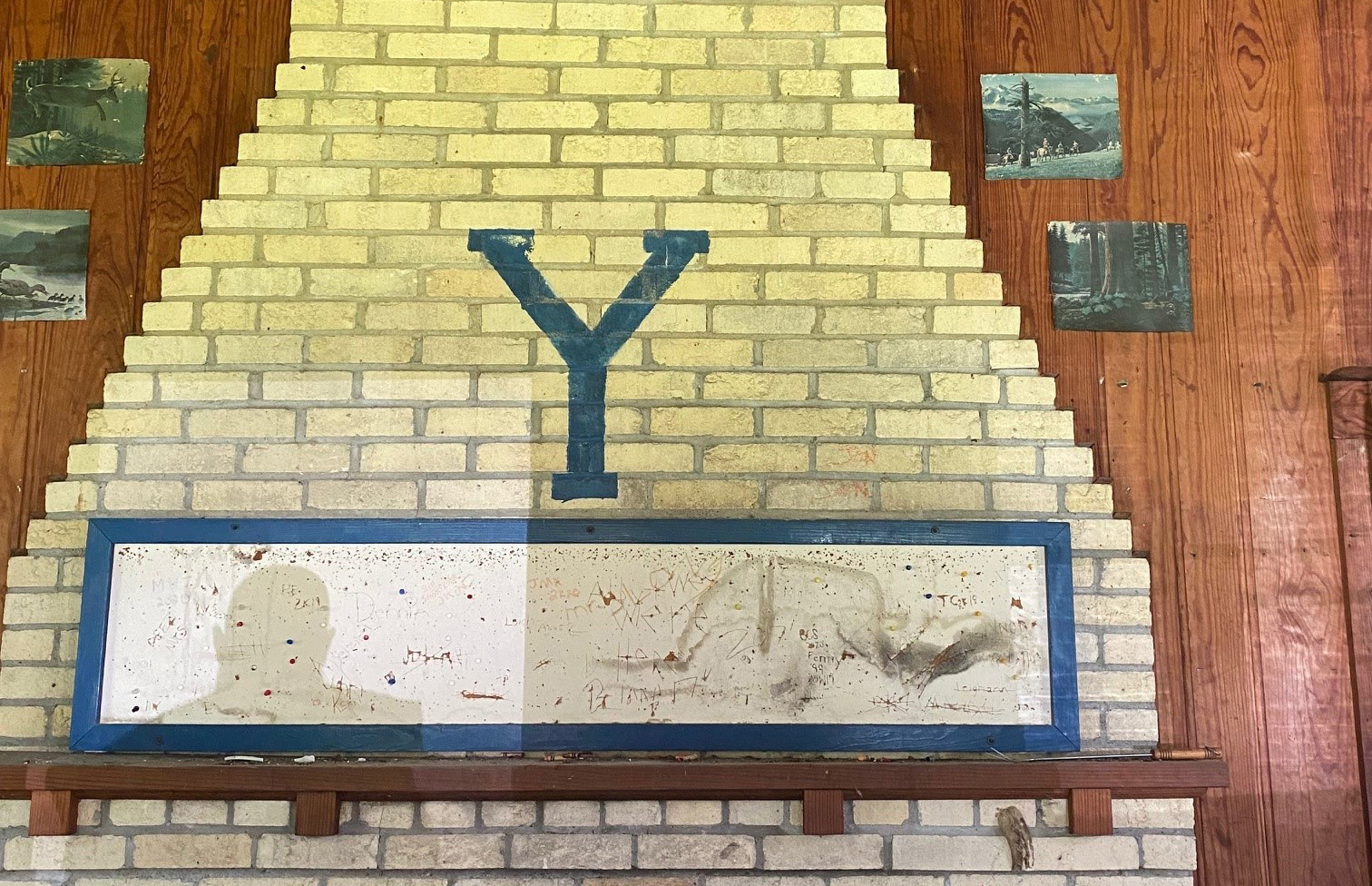 The massive fireplace in the Yale Camp dining hall was a key piece of the camp, and a big sticking point for moving companies.

“The area around Yale Camp is actively managed for timber production, but we set the camp site aside strictly to preserve its history,” Joe says. “It seemed like a shame for the buildings to stay empty, and city officials were excited about the idea of having these historical buildings in a more accessible place for the whole community.”

In early 2021, Southern Timberlands decided to donate the main hall and bunkhouses to the city of Crossett, which included relocating them to the 56-acre Crossett City Park. Gary Hill, region manager, enlisted Joe, Gloria Elliott (senior finance manager based at our Ruston, Louisiana, Timberlands office), Pam Richardson (administrative coordinator for the Crossett office) and others to work out the logistics.

Joe quickly discovered that moving the smaller buildings would be relatively simple — they could be jacked up off their foundations and placed on trailers. But the dining hall posed a problem. Every moving company he talked to said its 27-foot-tall stone fireplace and chimney would have to be demolished in order to move the hall.

“I spoke to local residents, foresters and former Girl Scouts who stayed at Yale Camp as children to learn what they loved most about it,” Joe says. “They all said, ‘That big beautiful fireplace with the giant Y on the front.’ Destroying it or trying to duplicate the original wasn’t the answer.” 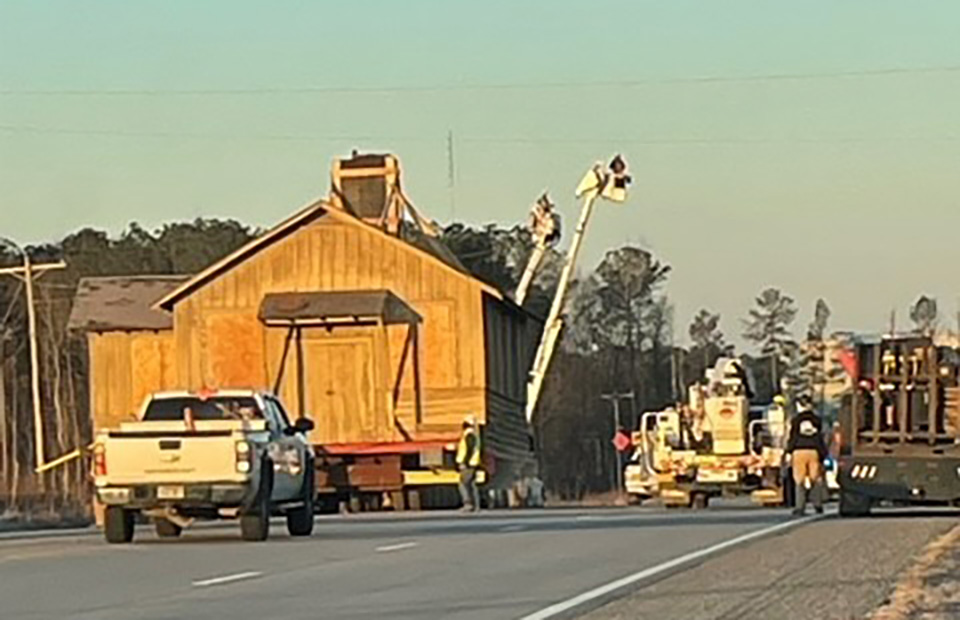 The dining hall makes its slow way through town. Notice the two bucket trucks used by utilities crews to lift overhead wires above the massive chimney.

The Yale Camp buildings installed at their new home in Crossett City Park. After some renovation work, they’ll be open and accessible to the public.

GOING THE EXTRA MILE FOR THE COMMUNITY

“They actually chiseled the fireplace off the foundation, put steel supports through the chimney, jacked the whole building up and assembled a giant trailer underneath,” Joe says. “They estimated that the fireplace and chimney alone weighed 50,000 pounds.”

The Arkansas Department of Transportation and local utility companies agreed to help the buildings reach their destination safely. Pam and Gloria worked out the permits, fees and payments for each part of the camp’s journey.

More than a dozen bucket trucks lifted power lines at approximately 50 crossings along the four-mile journey, which took seven hours to complete. 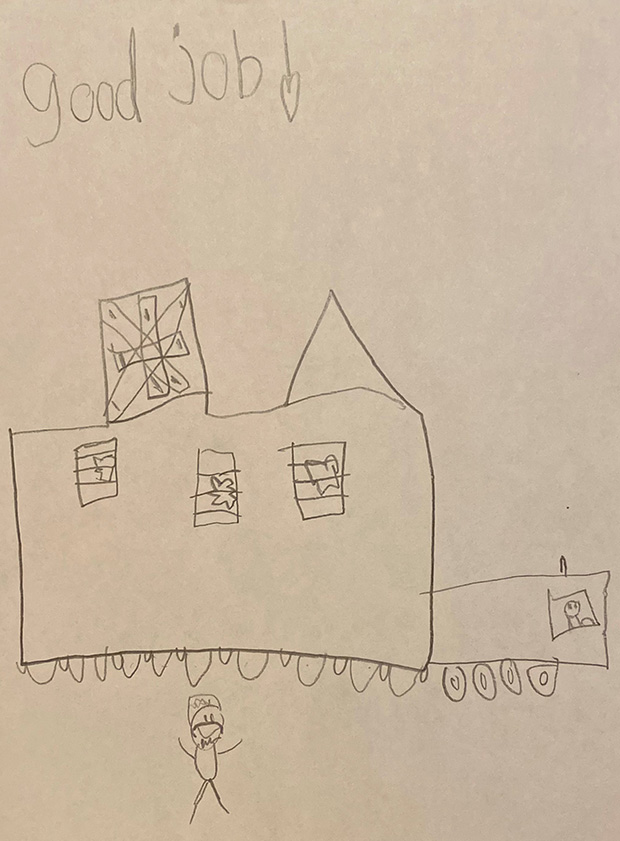 “John Henry came out to the camp with me a lot while I was trying to figure out this process, and he got to watch the move,” Joe says. “When he got home, he drew this picture of the dining hall going down the road. I sent it to the house movers, and they put it on Facebook, where it was spotted by a board member of the International Association of Structural Movers. They wrote an article about moving the camp in their magazine and used my son’s picture. That was really exciting for all of us.”