From Aspens to Ashes

ENERGY-EFFICIENT EDSON FINDS A USE FOR ALL THE LOG

George Hendry, an OSB market development manager based in British Columbia, often refers to our Edson, Alberta, mill when talking to customers and prospects about the advantages of using OSB.

“Aside from all the attributes that make OSB great to build with, it also has a great sustainability story,” Hendry says. “Edson’s a great example. They’ve found ways to cut waste by using nearly 100 percent of every log — even down to the ashes.”

MAKING USE OF MANY SPECIES

The process for making OSB is incredibly efficient, starting with the logs themselves. Operations often use logs that are too small for dimensional lumber, from species that don’t have as many uses in the marketplace.

“Edson uses aspen and poplar, which are harvested alongside species like Douglas fir,” Hendry says. “Without OSB, these smaller and less desirable logs might just go to waste.”

But thanks to demand for OSB as a building material in residential and light-commercial construction, this fiber is put to good use in our mills.

First, logs are conditioned in ponds that warm them in the winter, then debarked and shredded into strands. The bark is used as fuel in the two boilers that heat the mill, its press, and the pond itself.

“The pond improves wood recovery, which means we get more useable strands out of every log,” says Jennifer Armstrong, Edson’s technical and environmental manager.

Strands are ideally about 4 inches by 1.5 inches. The finest particles, aptly called fines, were once screened out and burned for fuel. But two years ago, Edson added a double screening system that adds intermediate fines back into the manufacturing process, allowing them to use more of the log in the final product than ever before.

These aren’t the only efficiencies that help reduce waste and residuals. After the strands are combined with resin and formed into mats, excess material on the forming line is suctioned off and reused for the core of the OSB product, where its stickiness is more useful.

“If you count the residuals and waste we burn to create energy, we use almost the entire log,” says Carter Marr, an environmental coordinator on Edson’s technical team.

A DASH OF ASH

That includes the ash — about 2,000 tons annually — created from burning renewable biomass.

Since 2002, the Edson team has worked with provincial regulatory authorities to provide the ashes to regional farmers rather than sending it to landfills.

“Natural soil pH levels in Alberta can be quite acidic, which hinders growth in certain crops, like alfalfa,” Marr says. “Ash is a beneficial soil additive.”

That’s because calcium carbonate — an abundant element in wood ash — helps improve the pH levels of acidic soils. Ash can also be a natural source of potassium, phosphorus and magnesium, the fundamental components of commercial fertilizers.

“Edson’s efforts give us a great story to tell about Weyerhaeuser and OSB,” Hendry says. “We not only have sustainable forestry and manufacturing processes, but we’re good neighbors as well.” 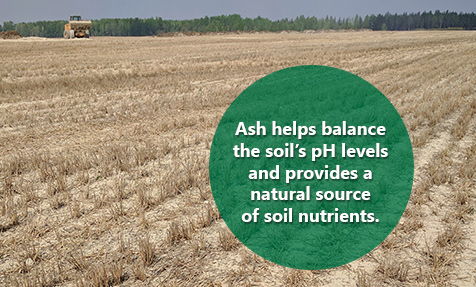 Get updates from the blog with our Sustainability Stories newsletter.