Go, fish, go: It took a community to restore an Oregon creek to its natural state

For the first time in 70 years, threatened and vulnerable migratory fish now have access to two additional miles of critical cold-water habitat on our property in southwest Oregon.

The collaborative effort between Weyerhaeuser and multiple private, nonprofit and government organizations restored a section of Baker Creek, a tributary of the Coquille (pronounced ko-keel) River, to its natural state after the removal of a longstanding human-made barrier to fish passage.

The creek opened up in late summer 2019, and the fish — including coho and Chinook salmon, steelhead and coastal cutthroat trout, and Pacific lamprey — are already taking advantage.

An engineer by training, Jason served as Weyerhaeuser’s point person on the project, which removed a massive earth-fill and culvert dating back to the early 1950s. The barriers were introduced when a previous landowner demolished a turn-of-the-century wooden railroad trestle bridge that crossed over a small canyon above the creek.

A COMMUNITY OF SUPPORT

Instead of replacing the bridge, the landowner filled the canyon with earth and rebuilt the railroad over it. The creek was diverted into a 250-foot long, 12-foot diameter culvert buried beneath the earth-fill. But the downstream end of the culvert was perched 18 feet above the streambed, creating an impossible bottleneck for native migratory fish.

By the ‘80s, the railroad had been decommissioned. Georgia-Pacific, which owned the property at the time, started to remove the earth-fill but halted the project when it encountered bank-stability issues. In 1994, the company installed a fish ladder to address growing concerns about the loss of access to fish habitat across the state.

“At the time, the ladder was an award-winning design,” Jason says. “Some fish made it up the ladder, but it ended up being too steep for most and prone to blockage from debris that needed to be constantly cleared.”

A GROWING SENSE OF URGENCY

When Plum Creek purchased the property from Georgia-Pacific in 2001, Baker Creek had become a designated “key watershed” for maintaining and recovering at-risk migratory fish habitat in the U.S. Department of Agriculture’s Northwest Forest Plan.

As a result, Plum Creek earmarked it as a top priority but was unable to overcome the project’s significant engineering challenges.

“After Weyerhaeuser merged with Plum Creek in 2016, the Baker Creek project was brought to our attention,” Jason says. “Thanks to our engineering resources and expertise, we believed there was a path forward.”

One of his immediate next steps was to combine Weyerhaeuser resources with the local Coquille Watershed Association, which had also worked with Plum Creek on the project. Also known as CoqWA, the nonprofit works collaboratively with landowners to develop and implement voluntary restoration projects that promote healthy and resilient ecosystems.

“There was no legal, regulatory or operational mandate for Weyerhaeuser to take on this project,” says Kyle Motley, restoration program coordinator for CoqWA. “But the company embraced it for the benefit of the environment and the fish.”

Over the next year and a half, Weyerhaeuser and CoqWA consulted various experts — including internal and third-party geologists, engineers and environmental specialists, as well as Oregon’s acclaimed River Design Group — to develop a comprehensive restoration plan.

“Prior to construction, we conducted a fish salvage just above and just below the culvert, which demonstrated the importance of removing the bottleneck,” Kyle says. “There were about 100 steelhead trout juveniles and six coho salmon juveniles above the culvert, but 300 steelhead, 200 coho, and even a few lamprey and Pacific giant salamanders, below it.”

Restoring fish habitat was also important for the tribe. In the tradition of their ancestors, the tribe holds a lamprey “float” every spring. Starting near the Baker Creek restoration site, they float toward the ocean in kayaks and harvest lamprey, an eel-like fish.

“In the past, tribes might have been left on the sidelines for projects like Baker Creek, but this time our voice was heard in so many ways,” says Helena Linnell, a wildlife biologist with the Coquille Tribe, who also served as a liaison between the tribe and project partners. “Cooperation between landowners, native peoples and the government can deliver meaningful results for everyone involved.”

In the summer of 2019, with planning done and permits in hand, the long-anticipated restoration of Baker Creek was well underway. But engineering challenges once again threatened the project.

“At one point, we stopped excavation work due to bank-stability concerns,” Jason says.

Geological and engineering assessments identified an unstable clay layer as the culprit, and the team decided to dig a little deeper to remove it. To provide additional stability, the canyon was rounded into more a more stable U-shape instead of the V-shape left after initial fill removal.

“It was a massive undertaking, adding an additional 20,000 cubic yards of dirt that had to be removed,” Jason says. “It was more like removing an earthen dam than restoring a creek, but we worked with our partners and found a way to get it done.”

By the end of the summer, a pilot channel had been established and Baker Creek was flowing down the canyon floor for the first time in 70 years. While there’s still some work to complete in the coming months, including planting native trees and shrubs on the creek’s banks, the fish aren’t waiting.

“It didn’t take long for the pilot channel to find the historical channel and for the fish to start returning,” Jason says. “All we had to do was give Mother Nature a fighting chance.” 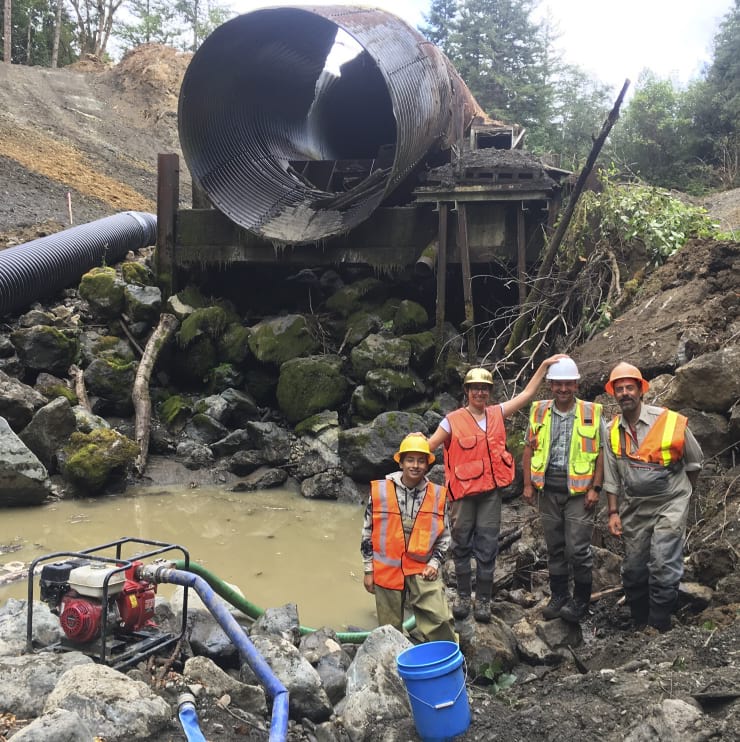 Representatives from the Coquille Watershed Association and state and federal agencies stand in front of the Baker Creek culvert. Removing the culvert and 30,000 cubic yards of earth-fill opened up two miles of native fish habitat. 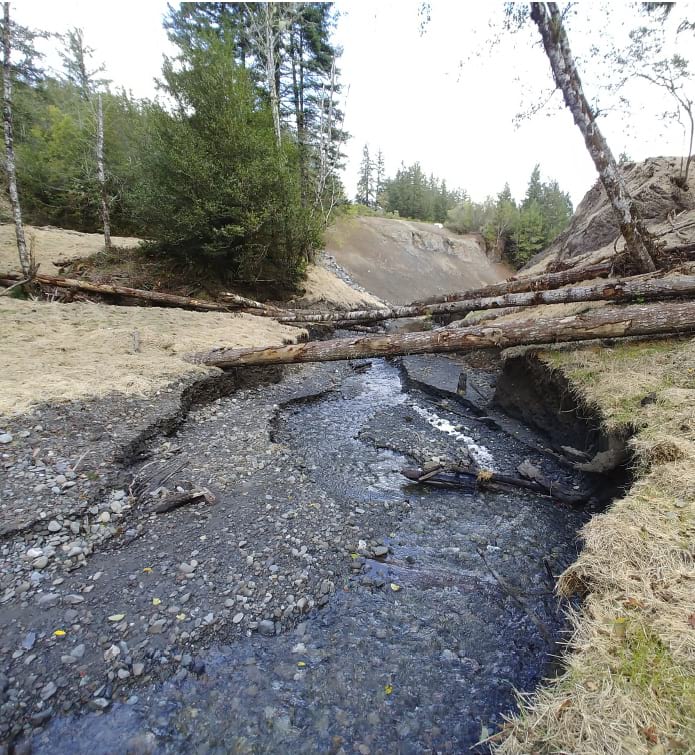 A post-restoration photo of Baker Creek, a tributary of the Coquille River. The Coquille watershed encompasses a 1,089-square-mile area primarily located in Coos County, Oregon.

Baker Creek several months after the restoration. Limited cold water refugia (an area where special environmental circumstances have enabled a species or a community of species to survive after extinction in surrounding areas) like those provided by Baker Creek are critical for the survival of native migratory fish populations.

From West Virginia to Washington, SFI® Audit Successes in 2021 Set the Tone for 2022