Opening access: New agreement in Oregon is a win for communities, tribe, hunters and WY

In August, after more than two years of hard work and negotiations, 92,000 acres of our Oregon timberlands in Lincoln and Polk counties were opened to the public for the first time in years.

“The local communities here live and breathe hunting, so it’s a huge win,” says Michelle Metcalf, recreation access manager for the Northwest. “This land was part of the Plum Creek merger, and part of Georgia-Pacific before that, and each company allowed different access. We’ve been searching for a way to safely open this land to recreational access.”

Among the logistical challenges were finding a way to ensure security and proper maintenance on the land with the additional traffic on our logging roads. In most cases, the easiest way to manage those challenges is to add the land to our recreational access programs, where the public can buy recreational permits to access our lands. But these particular tree farms, Alsea and Mid-Coast, aren’t solid blocks of Weyerhaeuser land, but rather a checkerboard of Weyerhaeuser parcels alternating with a mix of government, tribal and private land.

Each neighboring landowner has a different land-use agreement set up with us — and us with them — to use and maintain roads that pass through each ownership. In some cases, those agreements don’t allow public access.

“It gets complicated quickly,” says Scott Marlega, a land use manager based in Oregon. “We spent a lot of time listening to the local teams at Alsea and Mid-Coast, and members of the surrounding communities, to figure out how to best allow safe public access.” 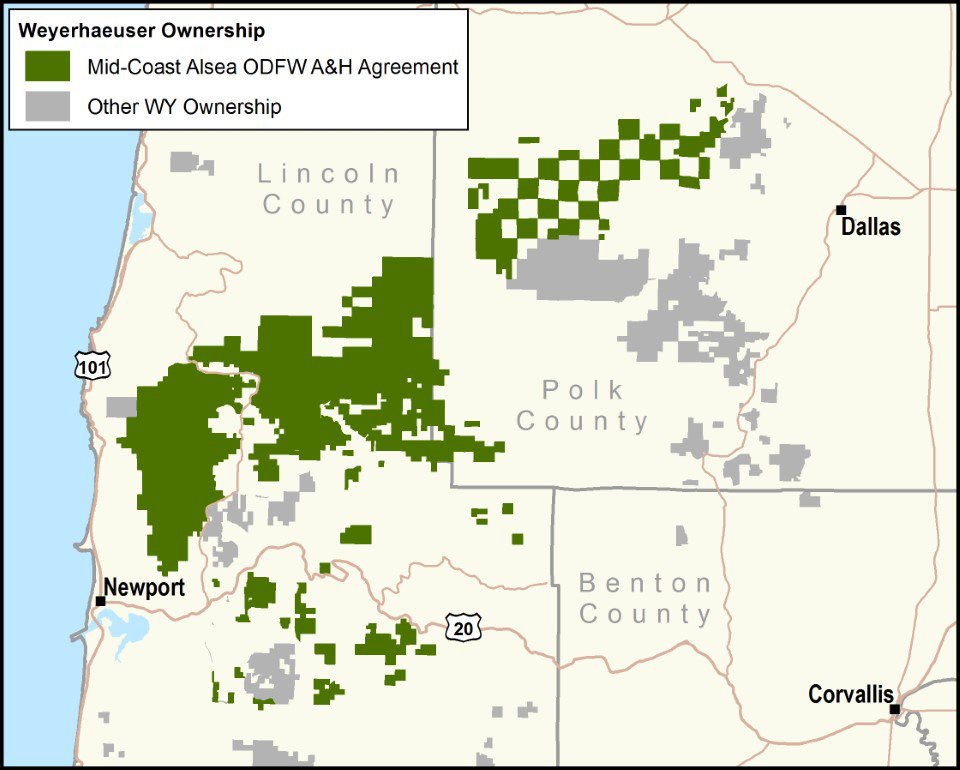 A map of the 92,000 acres now part of the Oregon Department of Fish & Wildlife’s Access & Habitat Program. The checkerboard land in Polk County is the Alsea tree farm; the land in Lincoln County is the Mid-Coast tree farm.

In 2018, a 7,000-acre Oregon Coast Range acquisition from Hancock Timber Resource Group offered a solution when those acres were included in the Access & Habitat Program from the Oregon Department of Fish & Wildlife.

The A&H program, established by the state legislature in 1993, uses money from hunting licenses to pay private landholders to open their land for public recreational use, with the goal of improving public hunting and wildlife access.

“Most land in the program is on the eastern side of the state, where there’s a lot of private property,” Scott says. “Hancock broke new ground by putting a large portion of their coastal ownership in the program.”

The program was exactly what Michelle, Scott and the Willamette Valley Timberlands teams were looking for, and they created a proposal to offer public access to 200,000 acres under the A&H Program in 2019.

“Everyone was excited,” Scott says. “Weyerhaeuser and Hancock are the biggest private landowners in Lincoln County, so having us both part of the same program gives locals consistency and opens up a lot of new acreage.”

Our proposal passed the first step of assessment by local Access & Habitat boards, and it was then was passed along to the state board, which operates under the Oregon Department of Fish & Wildlife.

“ODFW was really excited to find a way to get our Mill Creek area open to the public because it leads into a large portion of checkerboard ownership,” Michelle says. “But ODFW had limited budget resources left for our proposal and didn’t have the funds to extend us a grant in 2019. We were asked to resubmit in 2020.”

So Michelle, Scott and our Timberlands teams tweaked the proposal and resubmitted. The 2020 proposal was for 211,000 acres, a large portion of which was the checkerboard ownership area of our Alsea tree farm.

“We worked with an ODFW wildlife biologist to determine where to allow motorized access, since non-motorized areas give wildlife like elk and deer a less stressful area to forage,” Michelle says. “Lincoln County is a very popular elk-hunting area, and ODFW is really focused on preserving opportunities to hunt, so we knew we had a strong case. We also committed to putting 10 percent of the grant money received toward improving wildlife habitat or supporting youth hunter education.”

ODFW had budget, but not for the entire acreage proposed. After some rounds of negotiations, they settled on a grant that covered 92,000 acres of the initial proposal, including the checkerboard ownership. Much of the adjacent lands in those acres are public land owned by the Bureau of Land Management, which means the A&H program grant will open up not only our land, but also access to all the adjacent federal land.

“The program is a great fit for this land,” Michelle says. “It provides us income to help maintain our road network and fund extra forest patrol security contractors. At the same time, we’re building a good partnership with ODFW and increasing positive relationships with the community.”

Scott agrees. “ODFW really chose the best acreage as far as wildlife,” he says. “Not only for big-game hunting, but also for fishing the Siletz river, ensuring local community access for outdoor recreation, and for popular hiking trails like the Valley of Giants, a Bureau of Land Management old-growth forest preserve near Falls City that’s accessible via six miles on our logging roads.”

The land in the A&H Program, which is accessed by 18 of our gated entry points, will be part of the program for five years. Scott erected kiosks at each of the 18 gated entry points that include ODFW maps of the access area, access point IDs for easy location reporting, and 12 basic rules everyone must follow.

“You can reach basically everything from those 18 gates,” Scott says. “And we’ve committed that they’ll stay open later into fire season, until the state raises the Industrial Fire Precaution Level to three.”

Though this year’s extreme fire season in Oregon cut short the expected use of the land, it didn’t dampen the excitement about it being added to the A&H program.

“Community members are so passionate about this land, just as we are,” Michelle says. “We’re thrilled to recognize their attachment to it by providing expanded access and habitat education.”