While it’s not uncommon for someone to switch jobs and move to a new location within the company, Luke Allen recently moved across the continent for the second time.

After graduating from the University of British Columbia with a degree in forest resources management in 2018, Luke joined our lumber mill in Drayton Valley, Alberta, as part of our professional development program. At the end of that assignment in 2019, he moved to Vanceboro, North Carolina, for a harvest manager position. Then in Sept. 2020, he moved back west to work as a product supply leader at our sawmill in Raymond, Washington. If you’re counting, that’s three roles in our two core businesses, covering two countries and three locations with two cross-continent moves.

“I think it’s important to gain experience working in different businesses, and I’ve always felt encouraged to take on something new,” says Luke, who grew up in Seattle. “I hope more people will take advantage of similar opportunities to create their unique career journey.” 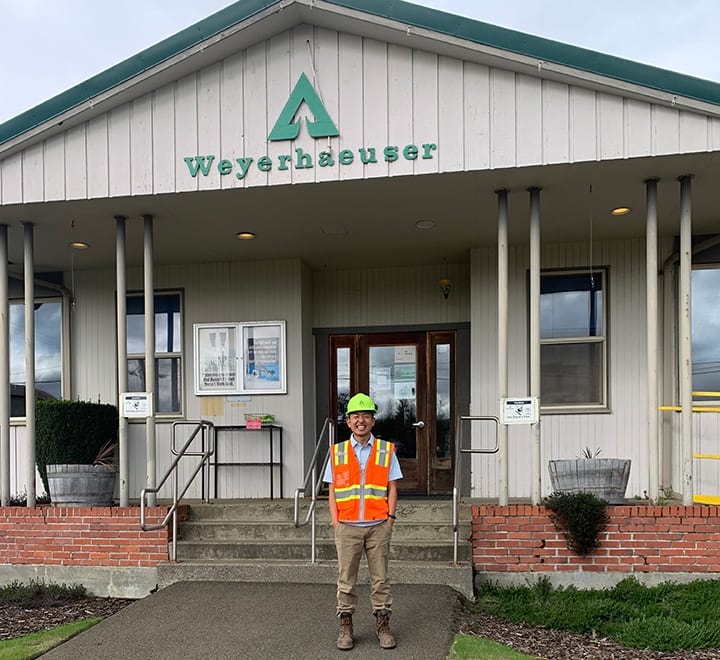 Luke in front of the entrance to our sawmill in Raymond, Washington, where he moved this past September.

BOOTS ON THE GROUND

When Luke began his own journey in Drayton Valley, he shadowed leaders in all parts of the business. He met with customers, worked in the log yard and the sawmill, the kilns and the planer mill, and in shipping. After a few months, he rotated through frontline leadership roles, which included leading teams in the sawmill and planer and filling in for leads during holidays.

“It was a boots-on-the-ground, in-the-woods type of role, looking at cut blocks and auditing our contract loggers while they worked, most importantly for safety,” he says. “I was pretty autonomous, often out in the woods by myself.”

Those were North Carolina woods. And Luke had never set foot in the South before.

“I couldn’t have done it without the support of my area manager, Jocelyn Wilson,” Luke says. “I had a lot to learn! There’s an experienced harvest manager team there, so I shadowed them and learned how to handle myself safely, in the field, on log decks and around harvesting equipment. My ability to succeed on the job is really a credit to the whole North Carolina/Virginia Timberlands team.”

Southern weather also offered new experiences. When he left Drayton Valley in April 2019, it was still snowing — a month later, it was 100 degrees in North Carolina. A few months after that, Luke weathered his first hurricane.

No matter how far he roamed for work or school, Luke visited his family in Seattle as often as he could. When the COVID-19 pandemic made it difficult to travel home, Luke realized he’d need to move again.

“I sat down and talked with Jocelyn about it, and she helped me keep an eye out for openings in the West,” he says.

“It’s an opportunity to gain a comprehensive understanding about shipping planning, inventory tracking and mill forecasting,” he says. “It’s obviously different from being in the woods, but I think it’s valuable knowledge along our entire lumber product line. I’m still very new at it all, but similar to Drayton Valley and Vanceboro, everyone’s been very willing to help me learn my way around.”

You might think he’d be a pro at moving across North America by now, but he says moving is always a challenge.

“It’s certainly less complicated than what others might experience, since I’m just moving myself, and not a partner or kids,” Luke says. “But the hardest part is always leaving the people I’ve worked with and come to appreciate along the way.”

Luke’s glad he took the leap to a new adventure in Raymond, which felt like more familiar territory — he has a very dear memory of eating barbecued oysters at a restaurant in nearby South Bend when he was a kid.

“Raymond felt familiar to me, and I knew I would enjoy the small-town feel,” he says.

THE TIES THAT BIND

While each of Luke’s jobs has been quite unique, a few common threads tie them together.

“I’m always looking for something to learn, and at Weyerhaeuser there’s always someone willing to help,” he says. “It’s not easy being young and taking on a position leading people who’ve done their job for 40 years, or managing seasoned loggers who grew up in the business. But in each location, I’ve found people willing to take time to help me. That’s one of the greatest things about this company. Weyerhaeuser's culture, our values and our commitment to people development are the same, no matter where you are.”

Ron Crear Is Weyerhaeuser’s Evangelist for Inclusion and Fairness

We offer a range of exciting career opportunities for talented people who are passionate about making a difference.