From River Log Drives to Revolutionizing Risk Mitigation, Clarence Begin Has Seen a Lot in His 48 Years

Clarence and Kathy take the Harley, aka “The Dragon,” for a drive through Tennessee.

Clarence Begin knows our Maine Timberlands well — for good reason. He’s worked the same land base for 48 years, in a wide variety of jobs for a number of different companies.

Unsurprisingly, he’s also seen significant changes in the industry since he started as a heavy equipment mechanic in 1974, from the end of the river log drives in the 1970s to major recent improvements in worker safety.

In the early 1980s, Clarence worked closely with Swedish logger and safety icon Soren Eriksson. The company was adapting Soren’s techniques, detailed in his 1981 book “Game of Logging,” into our operations.

“We had a lot of French-speaking crews from Canada, and I’m fluent in French, so I tagged along as translator,” Clarence says. “Soren talked about working smarter, not harder, and taking the time to think about the safety risks involved in what you were about to do.”

In those days, risk assessment and mitigation in the woods were revolutionary ideas. Fellers tended to grab a chainsaw and start cutting without thinking about where a tree might fall, Clarence says.

“I’ve seen people killed on the job,” Clarence says. “It’s the worst feeling, and I’ll never forget having to explain to the family what happened.”

As safety improved over the years, Clarence kept pushing his team to achieve an injury-free workplace. In 2017, a year after he joined Weyerhaeuser through the Plum Creek merger, he was given a Truly Great Award partly for his role in championing safety. Now, as he looks forward to retirement, he has one last piece of advice for his colleagues and contractor crews: “I know we’re awfully busy, but rushing is never worth it. Work safe, play smart.” 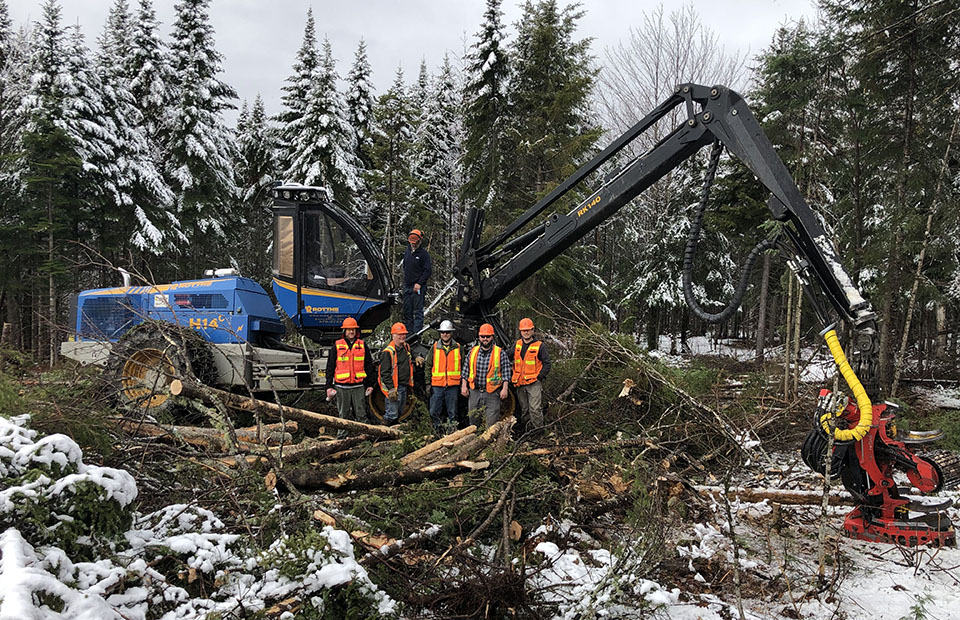 In 2019, Clarence, second from left, reviews the process for efficiently and accurately sorting logs on a landing with contractors and colleagues.

Your title is harvesting forester. Tell us what you do.

I look after harvest equipment and contract harvest crews. There are usually four crews working at a time, but sometimes as many as seven or eight. I’ve been in this role since 2016. Before that, I laid out road and felling blocks. I’ve worn many different hats — starting with Scott Paper, through a few acquisitions that included most recently Plum Creek and Weyerhaeuser. I’m retiring in early June and looking forward to spending time with my new granddaughter.

What led you to choose this job?

I was hired as a heavy equipment mechanic in 1974 in Bingham, about 50 miles from home. This was back in the days when river log drives supplied the mills. But times were changing, and mills relied more and more on trucks to deliver logs. After 25 years, in one of the four company acquisitions, I was told to grab a compass and work the woods.

Typically, I spend Mondays looking at what I’m getting into for the week, including site visits later in the week. A lot can change over the weekend because contractors are often working, so I need to understand any new issues — weather-related slowdowns, equipment stuck in the mud, mechanical problems, things like that. Once I have a handle on where things stand, I lock in my plans for the rest of the week. 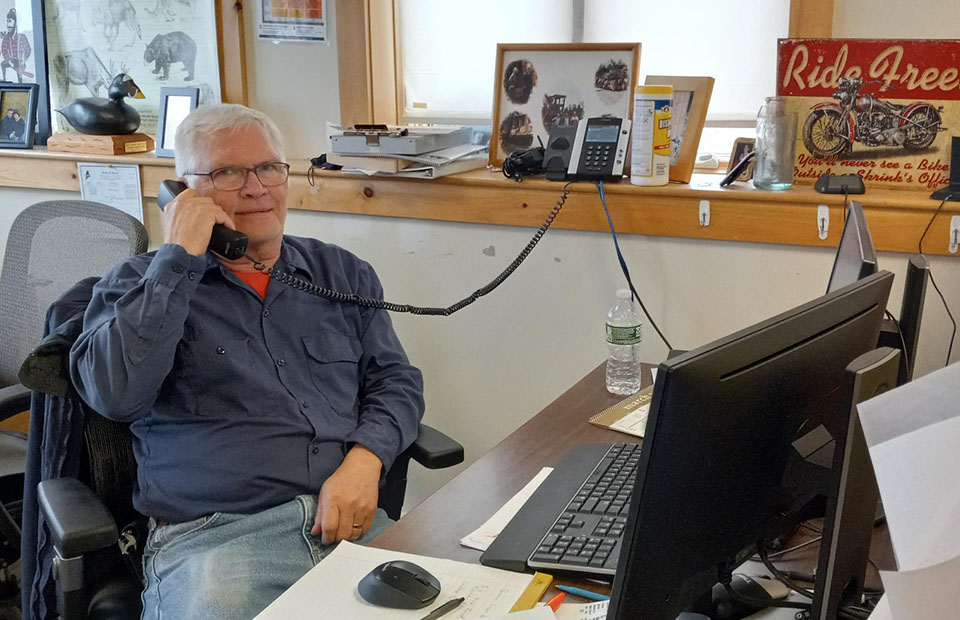 Clarence takes a call at the Timberlands office in Greenville, Maine. He’s retiring June 1 after 48 years with the company.

What’s your favorite part of the job?

Being in the woods, especially in the fall with the crisp air and seasonal colors. It’s also a great feeling seeing a woodpile on a landing at the end of the day and knowing how everyone worked together to make that happen safely.

You must have some challenges. What are they?

Weather. We can get massive, unexpected storms that can delay work in a number of ways. For example, a crew might discover their water bars, which channel precipitation to desired areas, weren’t installed in precisely the right places, which makes the ground water-logged and harder to work. We try to stay ahead of the weather as much as possible.

Tell us something about your job that might surprise people.

People outside our industry don’t always know how much we do to protect wildlife. We recently had a job where the Quebec emerald dragonfly, which Maine lists as a vulnerable species, was possibly onsite, so we worked with our biologists and state officials before moving forward. We also report invasive plant species to officials so they can be tracked.

What advice would you give people just entering forestry?

Be flexible and tap the knowledge and experience of your teammates. If things get tough, raise your hand and ask for help. Everyone in this company wants you to succeed.

What are you most proud of in your career?

I received my state forestry license about eight years ago after working toward it for about 10 years. I don’t have a college degree but certainly possess plenty of experience. My boss John Ackley encouraged me to pursue it, and it ended up being one of my most deeply personal career achievements.

Who are your customers?

The team I work with, including contractors. Every day, they make sure we deliver the right logs to the right place at the right time. Our logs go to third-party mills across the region, and I like to visit them from time to time. I’ll chat with the foreman or crane operator or the scaler, the people who handle the logs, to understand their needs. 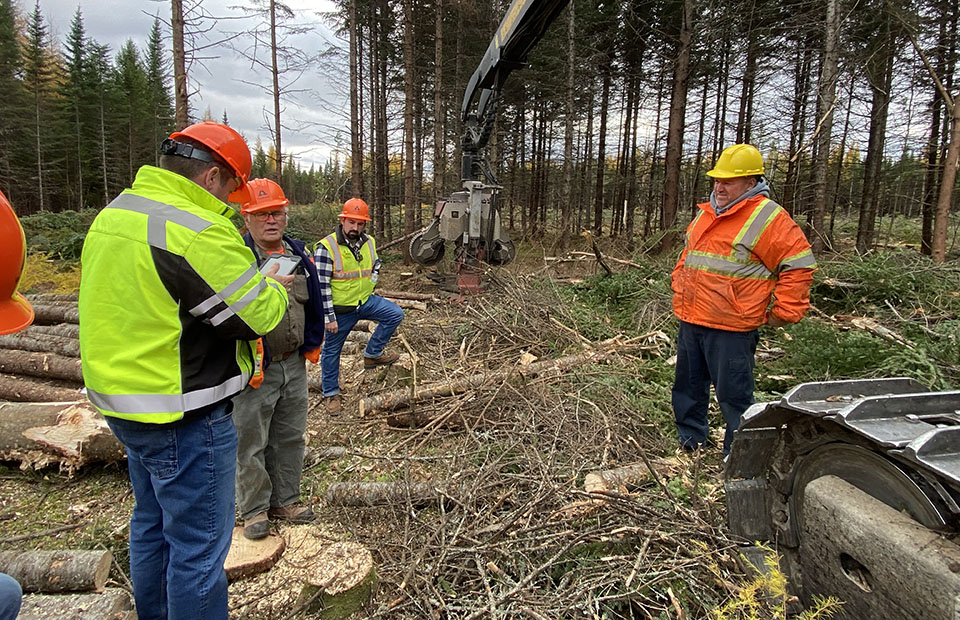 I spend quite a bit of time in my pick-up truck. Right now, I have a contractor within three miles of my home base. But it’s not always so convenient. Sometimes I’ll have crews 50 miles apart from each other, which makes for long days on the road. My truck includes what you’d expect: visibility vests and flagging materials, a first aid kit, tire chains, a CB radio, extra clothes, and rain gear.

Everyone helps each other. There are a lot of long-timers like me around here, and we all enjoy mentoring new folks. We’ll share our experience with different equipment and what works best, evaluate other logging methods, point out wildlife areas — and, of course, talk a lot about safe practices. We also introduce mentees to contractors. Everyone learns from contractors: their challenges, what they’re logging, how they’re dealing with the weather.

Tell us about your other interests. What kinds of things will you be doing in retirement?

I’m an EMT and volunteer for the local ambulance service. I have an old ’57 Harley, so I’ll tool around with that. And I enjoy refinishing furniture and woodworking. But mostly, I’m hoping to travel with my wife Kathy. She was diagnosed with Leukemia six years ago. She’s doing much better these days. After we spend a few months with our new grandchild, we’re planning a cross-country tour — don’t worry, not on the Harley. 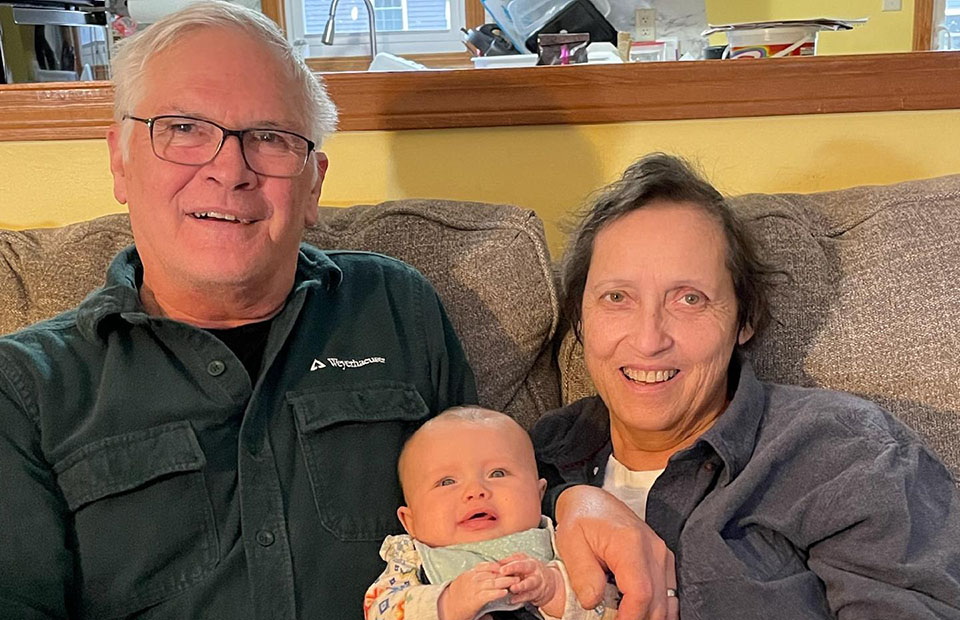 Clarence and his wife Kathy with Maeve, their new — and first —grandchild.