On Sept. 9, 2020, three wildfires converged within the Santiam Canyon in Oregon. Fanned by powerful east winds in the midst of a heatwave, the fires devoured 80 percent of the structures in the small town of Detroit, along with about 125,000 acres of our own timberlands.

“Driving through the canyon, you see all this devastation,” says Sue Woodall, seed and sales manager at our seed orchard in Turner, Oregon. “In some neighborhoods there’s nothing left but a few chimneys. It’s pretty clear that while we’ll be able to replant our tree farms, many families who were impacted won’t rebound so quickly.”

Western Regeneration decided to donate a portion of the seedlings designated for our own recovery to the people of Detroit, and a team of Weyerhaeuser volunteers convened on Oct. 30 to hand out 10,000 Douglas-fir seedlings to local residents.

“This is a community we live and operate in, and they really needed our support,” says Erik Lease, director of silviculture based in Vancouver, Washington. “Planting these trees has a practical application of helping renew the town and prevent soil erosion, but it’s also a symbolic gesture that says, ‘We care, and we’ll continue to be here for you.’”

CALLING IN THE TROOPS
Western Regeneration team lead Jeff Mehlschau reached out to the Snow Peak team to kickstart the donation event. The teams at our Turner seed orchard, our nursery in Rochester, Washington, and from the marketing and sales departments of Western Timberlands all jumped in to offer support.

“Connecting with the community is a primary goal of our regeneration facilities, and every year we look for opportunities to help people in need,” Jeff says. “We zeroed in on Detroit as an obvious priority.”

“Kyleigh Gill from our communications team stepped in and helped us craft a media alert so we could get the word out,” Debbie says. “Even then, we weren’t sure how much of a response we’d get.” 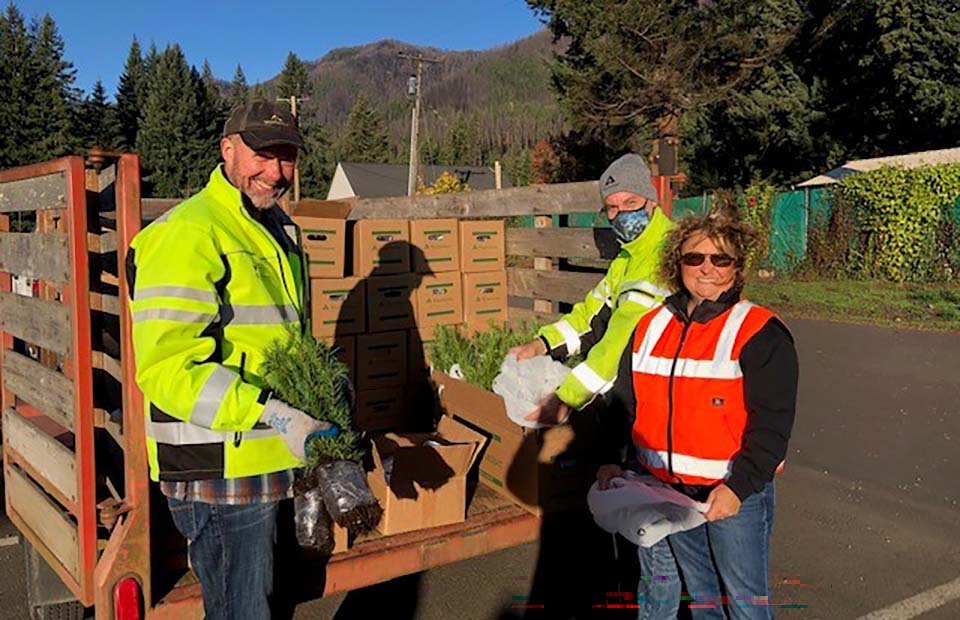 A DAY OF HOPE
On the cold, windy day of the giveaway, the team of volunteers — members of the Western Regeneration team, Kyleigh, Cara, Jill Bell, Snow Peak area manager, and Rudy Frazzini, Snow Peak forester — helped load and unload the seedlings, hand them out, demonstrate how to properly plant them and answer questions ranging from seedling care to how we operate.

At least 100 people came to pick up seedlings for themselves, neighbors and family members.

“When we saw their faces, the enormity of their loss really hit us,” Debbie says. “They couldn’t thank us enough. It made me so proud of our team and grateful to work for a company that gives back to people in need.”

After five hours, most of the seedlings were gone and the remainder were packed up and headed back to Turner. Then a new group showed up from the nearby towns of Gates and Mill City, which were also affected by the fires.

“We actually stopped Jeff on the highway to arrange a delivery and make sure these folks got their trees,” Sue says. “They had a whole network of friends and neighbors who were eager to start replanting, so they were relieved they got in under the wire.” 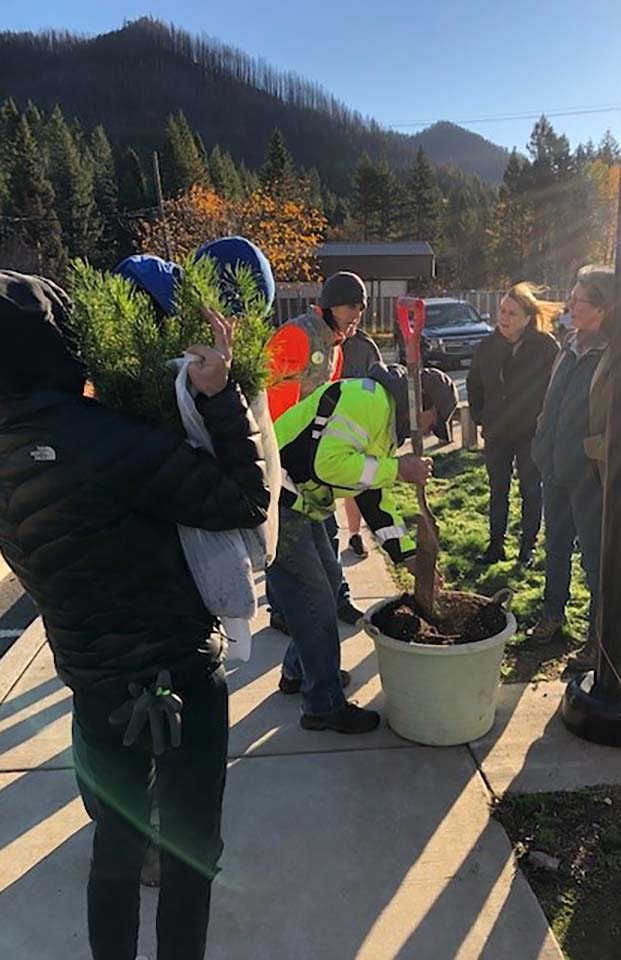 A TEAM EFFORT FOR A WORTHWHILE CAUSE
More than a year into recovery efforts, we’ve replanted about half the trees that were lost to the fires. In total, it will take 22 to 25 million Douglas-fir seedlings to replant affected areas on our land.

The volunteers say the small sacrifice of 10,000 seedlings was worth it to make a difference in Detroit.

“We get a lot of requests for free trees that we can’t always fulfill,” Sue says. “This time, nobody asked. We made the offer because it was the right thing to do.”

In addition to the giveaway and the work of volunteers, Weyerhaeuser has donated more than $450,000 to recovery efforts across Oregon. Some of those funds helped rebuild the park where the giveaway was held.

“Whatever we can do to breathe a tiny bit of life and hope back to this community is worth the effort,” Sue says. “We’re just thankful to be a part of it.”

“Thanks to all of you who were involved with this great and important work!” says Bill Frings, vice president of Western Timberlands. “Your time and commitment to our core values of citizenship and sustainability is greatly appreciated and exemplifies what being a truly great company is through providing great community support. You should be proud of this work and the teams you represent. It certainly illustrates that we have the opportunity to be part of something bigger as members of the Western Timberlands team.”