A deteriorating eyesore is no more on Bayou Dorcheat in northwest Louisiana. The state-designated Natural and Scenic River was returned to its natural state in December after we removed a long-abandoned wooden bridge in Webster Parrish.

It all started in April 2021 when Mark Woods, a land use forester in northern Louisiana, received a friendly call about the bridge from Chris Davis of the Louisiana Department of Wildlife and Fisheries’ Scenic Rivers program.

Chris explained how the 115-foot-long bridge had deteriorated to the point of becoming a navigation and safety hazard for recreationists, and he hoped we might be willing to remove it.

“We always want to be a good neighbor and do the right thing,” Mark says. “We promised to get it done and return the site to its natural state, which included seeding the bayou banks with native grass.”

Bayou Dorcheat originates in southern Arkansas and flows 122 miles south to Lake Bistineau, which feeds the Red River. Designated a Louisiana Scenic stream, Bayou Dorcheat is flanked by bottomland hardwoods and bald cypress and is home to diverse wildlife populations, from common game animals to threatened and rare species.

The bayou is also historically significant. Its banks are the traditional home of the Caddo Tribe of Native Americans. In the 1800s, sidewheel and sternwheel steamboats frequently navigated the waterway, bringing many early settlers to the area.

In the 1920s, oil reserves were discovered near the bayou, in Webster Parrish. An oil consortium built the one-lane wooden bridge in the 1940s to reduce travel time between the oil fields on either side of the bayou — oil fields with wells that once produced as much as 4,500 barrels a day.

Eventually, well productivity slowed, and so did travel across the bridge. When a timberlands acquisition brought the bridge into our ownership in 2002, the structure had been closed to vehicular traffic and abandoned for nearly a decade.

For the next two decades, the bridge went unused, a quiet relic of the past. But as it deteriorated, large sections fell into the bayou.

“The bayou is a community treasure,” Mark says. “When I raised Wildlife and Fisheries’ concern with our management team, we agreed to prioritize the project and quickly found the funds to remove the bridge.” 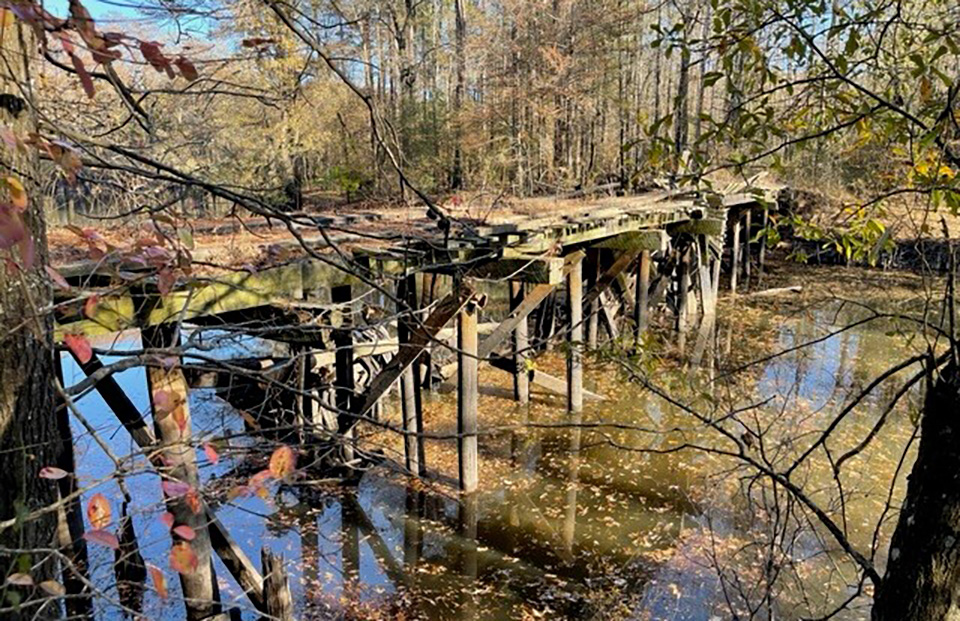 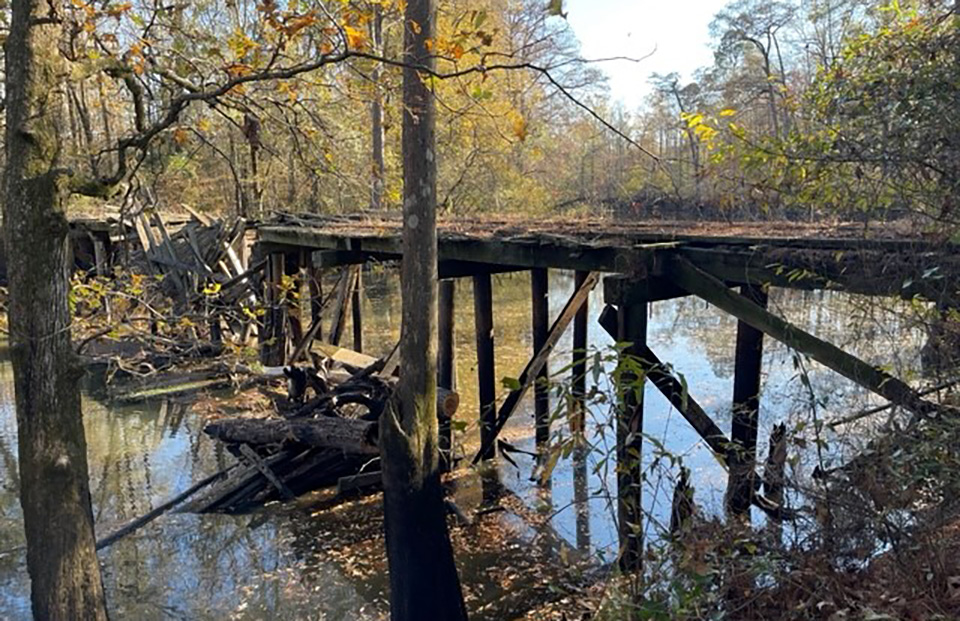 It took a week to remove the bridge over Bayou Dorcheat, an environmentally and historically important waterway that’s popular with recreationists.

Within weeks, Mark was vetting contractors to complete the demolition. He tracked down landowners on the east side of the bridge for permission to move heavy equipment across easements on their property. He also contacted successor companies of the bridge’s original installers to see if they would share the removal costs.

After planning, site visits, internal approvals, outreach to neighbors and some reinforcement of our roads to accommodate the equipment, work to remove the bridge started in December 2021. The demolition contractor, which has considerable experience removing railroad bridges, took about a week to complete the project.

“The contractor worked from both sides because their equipment only reaches so far,” Mark says. “They had to use cables to extract the center pylons.”

A special fire pit was used to burn much of the wood. The remaining waste materials, including metal fasteners, were hauled to a licensed landfill.

“Weyerhaeuser has a lot of property adjacent to Louisiana’s Scenic Rivers,” says Chris from the state’s Scenic Rivers program. “But this is the first time we had to remove a bridge. We were pleased with the quick response from Weyerhaeuser. The company’s level of communication and professionalism throughout the process was top-rate.”

Though Weyerhaeuser hadn’t built the original bridge, Mark is pleased we acted with urgency, integrity and accountability to restore a critical waterway on our land to its natural state.

“Residents from Webster Parrish and the region can fish, canoe and kayak on a bayou that’s free from a derelict old bridge,” Mark says. “You can’t even tell it was ever there.”

The bridge site following removal. The banks are also being seeded with native grass.

From West Virginia to Washington, SFI® Audit Successes in 2021 Set the Tone for 2022