The office at our MDF plant in Columbia Falls, Montana, which is now the longest-running MDF plant in the world. “We’re well known for being number one in quality, both among our competitors and our customers,” Sean says. “That generates a sense of pride and loyalty among our employees. One thing we did pre-COVID that I hope we can start again soon is taking new hires along for in-person visits to customer facilities. Not only do they see our product at work, they get to hear all these wonderful compliments about how great it is.”

In the 1920s, inventor William Mason was determined to find a use for scrap wood left over from lumber manufacturing. As the story goes, one night he accidentally left a press machine running and returned in the morning to find a primitive sheet of what we now know as “masonite,” or fiberboard.

Mason quickly patented his discovery. From it came particleboard, oriented strand board, plywood and medium-density fiberboard. The first dedicated MDF plant opened in the town of Deposit, New York, in 1965. Five more facilities followed, including our plant in Columbia Falls, Montana, which began production for Plum Creek in 1974.

By 2020, all five MDF plants that predated it closed, making Columbia Falls the oldest continuously operating MDF manufacturing facility in the world.

“The milestone is even more impressive when you know that the very same press has been in use this entire time,” says Tim Tadlock, who was quality control supervisor at Columbia Falls for four years before recently moving to Grayling for an environmental manager role. “It’s taken a lot of care and innovative thinking over the years to make that happen.”

AT THE VANGUARD OF ENGINEERED WOOD

Tim and Sean Connolly, technical director, made the discovery about their plant’s legacy after the previous record-holder shut down. That mill — in Plymouth, North Carolina — was once owned by Weyerhaeuser but was sold to another company in 2007.

“We were curious who was the oldest at that point, so we dug around and found a 1994 report put out by the U.S. Forest Service,” Tim says. “It listed the location, size and production capacity of each facility. Then we were able to determine which ones were still open.”

SOME THINGS CHANGE, SOME STAY THE SAME

Remarkably, thanks to the care and innovation Tim mentioned, the mill’s original press has remained in excellent working condition even as much of the equipment around it evolved. Manual levers and other equipment that required constant operation and supervision have since been replaced by computerized systems.

“At the center of it all is this steam-powered, 5-by-18-foot Washington Ironworks press that’s never been rebuilt and never seen any downtime,” says Shiloh Keibler, production superintendent. “That’s a result of very savvy people coming up with all kinds of brilliant hacks to keep it going. Because without a sister mill, they had to keep this one going at all times, no matter what.”

Scheduled maintenance was crucial to keep the press running, and upgrades that included bigger drying systems helped, too. The mill got a second production line in 2000, and the original is now known as Line 1.

The mill's original press is still in operation today, thanks to the innovation of the Columbia Falls team. Every two weeks, the press goes through a 12- to 14-hour maintenance cycle. The parts are lubed, the bearings are changed, other preventative maintenance is performed, and every component is double-checked. 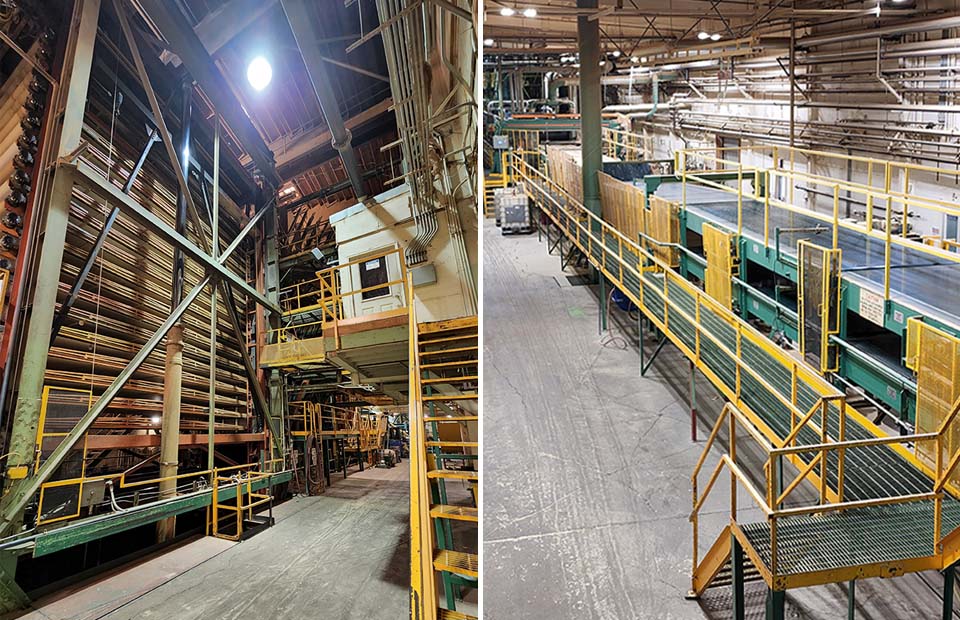 “Safety is a living thing that grows and evolves,” Tim says. “We’re constantly reevaluating our protocols. Most importantly, we’ve gotten every single employee involved and invested in making the mill as safe as it can possibly be. Safety comes first. Production is second.”

STRENGTH ROOTED IN CARING AND RESPECT

More than anything else, keeping a mill running at optimum quality for nearly 50 years takes dedication from its employees. Everyone wants the mill to be successful, so teamwork between the sales, operations and maintenance teams is essential.

A fixture of the small town of Columbia Falls for nearly half a century, the mill has had a big impact on the community as well. For decades the mill has donated materials and funds to The United Way and local schools and organizations.

“Even beyond what we do collectively, I’ve seen employees personally donate and sacrifice to neighbors in need, such as taking the Christmas hams we give them every year over to the food bank,” Sean says. “We take great pride in being a leader in the greater Flathead Valley when it comes to giving back.”