Early Prep, Rapid Response: Our teams are ready and on the lookout as fire season begins early in the Pacific Northwest

In late June, when temperatures across much of the Pacific Northwest soared to well over 100 degrees Fahrenheit, our Timberlands teams from Oregon to British Columbia were ready for the unseasonably hot weather. Their goal was to ensure the safety of coworkers and contractors in the unusually extreme conditions and, at the same time, reduce the risk of fires on our job sites.

“We ended up shutting down operations in North Washington during the peak of the heat dome,” says Chance Yeckley, a harvest manager on our Vail tree farm. “Most of operations throughout the Pacific Northwest did the same.”

Shutdowns are a standard — and important — fire mitigation tactic. In many cases, the order to stop work is mandated by state or provincial authorities based on a set of predetermined threat levels.

Complete shutdowns are required in the most severe conditions. During less severe weather patterns, authorities might order work to stop at 1 p.m., colloquially referred to as a “hootowl.” Or authorities might limit the use of certain higher-risk equipment, such as machines that could cause sparks when chains, saws or other parts scrape against rocks.

“The best way to contain a fire is to prevent it in the first place,” Chance says. “So we’re constantly evaluating risk in the woods.”

To do so, the teams look at things such as wind speed and humidity at the job site. If relative humidity falls below 30 percent in Washington or Oregon, work stops completely — even if the state hasn’t released a stop-work order. In British Columbia, our teams review the Fine Fuel Moisture Code (which measures the moisture of potential fuel on the forest floor), relative humidity and temperature readings to make a similar determination.

“Our number one goal is to keep our crews, our timberlands and our communities safe,” Chance says.

By mid-spring, our teams have updated and distributed detailed fire plans to anyone working a job site. The plans include emergency contact information and checklists for addressing various situations, from curtailing work in high-risk conditions to rapidly responding to a spot fire.

By May, our crews and contractors have conducted fire drills and practiced how to promptly lay and connect hoses to quickly respond to fires.

In May and June, fire trucks get final tune-ups and are stationed strategically across our job sites. For example, in British Columbia, operating procedures require a 4,000-liter water tank be available within 15 minutes of any job site.

“The tank is usually attached to a skidder and is often located near the feller-buncher, which can be a fire risk due to its hot exhaust system,” says Crystal Rogers, forestry supervisor in Princeton, British Columbia.

The buncher itself is equipped with a built-in fire-suppression system, a standard feature on our highest-risk equipment. Most large machines onsite have hand-held fire extinguishers in the cabs, and the pickup trucks our crews drive into the woods are loaded with water tanks and other firefighting equipment. 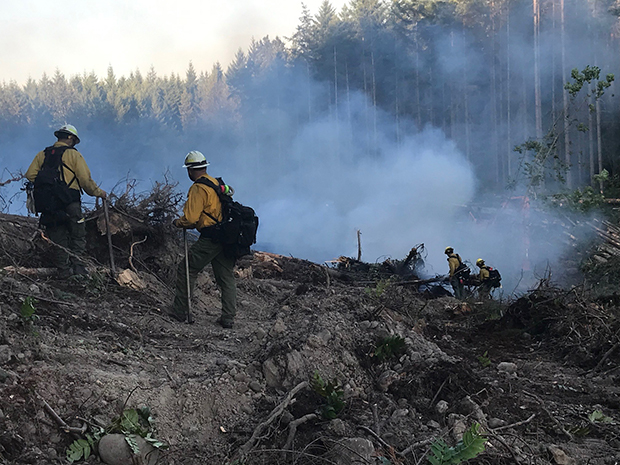 The Vail team works together to contain a fire.

“In the event of a spot fire, our immediate course of action is to attempt to contain it and put it out while it’s small, as long as we can do so safely,” Crystal says.

While most of this responsibility falls on crews already on the ground at a job site, we often have other company or contract resources on standby. In Washington and Oregon, that includes helicopters with water dipping buckets that are ready to fly at a moment’s notice.

If a spot fire does break out, our crews also immediately alert state and provincial authorities so they can muster additional firefighting crews and send them toward the fire as swiftly as possible.

“We always assume a spot fire will get bigger until it’s actually out,” says NW Oregon area manager Steve Keniston, who is located in Molalla, Oregon.

Steve also emphasizes the importance of working together with government authorities on fire prevention, preparation and response.

“Here in Oregon, it’s a complete and coordinated system,” he says. “We have regular ongoing communications with representatives from the Oregon Department of Forestry all year long. And during fire season, we’re constantly talking with them about fire conditions and reviewing active wildfires in the region, even those not on our properties.”

It’s not uncommon for Weyerhaeuser teams to support firefighting efforts on non-Weyerhaeuser property, and our neighboring landowners will often do the same for us.

“There’s a sense of reciprocity throughout the region,” Steve says. “People come together and respond. As last year demonstrated, a neighbor’s fire can be our fire in a heartbeat — or vice versa. And every fire affects our whole community.” 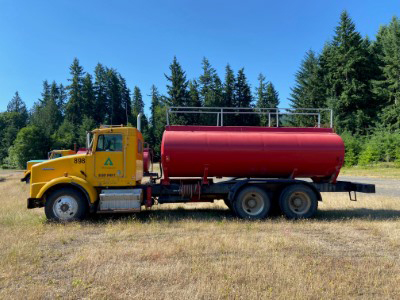 The water tank truck on our Vail tree farm in Washington, ready for action.

So far, even with the record-breaking hot weather arriving early in the Pacific Northwest, Weyerhaeuser timberlands haven’t been impacted by wildfire. Even so, some communities in the region have already experienced catastrophic loss, including parts of southern Oregon and the town of Lytton, British Columbia.

As summer progresses and the woods become drier, our teams say they remain on high alert, actively surveying our job sites and property for any sign of fire.

Fire-watch teams monitor every job site for at least an hour after crews are done for the day, alert for smoldering soil or stumps and other signs of fire.

And every summer afternoon, we send planes to fly above our timberlands in Oregon and Washington on the lookout for smoke. (In British Columbia, the government takes on this responsibility.)

“We’re proactively focused on prevention and monitoring,” Steve says. “In the event of a fire, I have a high degree of confidence that we’re prepared to respond quickly and aggressively to contain it safely.”