“I love hard science,” says Vaughan Andrews, a sustainability analyst based at our Seattle Headquarters.

He earned an undergrad degree in bioengineering at Rice University in Houston, Texas, and thoroughly enjoyed the courses. But he wasn’t certain what to do or where to go with his experience.

“I was motivated by the challenging coursework,” he says, “but I had trouble connecting what I was learning in class to what I’d do in the real world. And the companies looking for bioengineers wanted people who had completed their Ph.D. work.”

He didn’t see himself following that path, so instead he went into technology consulting based out of New York City. He was staffed at insurance, oil and gas, and consumer products companies, coming in for a few months to help on a project and then moving on to something new.

“I didn’t feel like my work had purpose,” he says. “Then I read the 2016 Gates Foundation letter, which included a simple equation that helped me understand how we might get global carbon emissions down to zero. I grew up with a respect and a love for nature, and I knew how serious climate change had become. I had just never made a connection that I could go work on these issues for my career. I thought, ‘That’s work that does have purpose,’ and I went right to Google to look for jobs related to mitigating climate change.”

Once again, his career research led to higher education — but this time, he saw the direct purpose of it. He enrolled in a master’s program for environmental science and management at the University of California, Santa Barbara’s Bren School of Environmental Science & Management. In 2018, the summer following his first year, he interned with our Sustainability team.

“I saw so many connections to both the Gates letter and the things I was learning in school,” he says. “And I recognized how rare it was to be doing a job that I’d gone to school for and was passionate about. I was thrilled when I was offered a full-time job."

Do you have a favorite project you’ve worked on so far?

I’m currently working on determining a new science-based target for carbon emissions reductions. It’s a huge project, which includes supporting Ara (Erickson, corporate sustainability director) in her work with a Greenhouse Gas Protocol working group to establish a system to account for how much carbon our trees and products remove from the atmosphere. We want to not only reduce our emissions as a company, but also show how much carbon we remove from the atmosphere. Our goals are expected to be in line with the Paris Climate Accord.

It could be, but our investors have actually been asking us to show how our goals align with the Paris Climate Accord for some years now. We have other reasons for following international standards, and we’ll be doing the same work regardless of which party is in the White House. The cool thing is that trees are a unifying factor, and everyone on Capitol Hill has recently come together in agreement that planting trees can have a greatly positive impact on the U.S. and the world at large.
​​​​

Where do you see yourself in five years?

Checking off all the awesome things we’ll have already accomplished in our sustainability strategy, which launched this year! My role today includes coordinating the work to implement our strategy, a lot of behind-the-scenes project management to support each of the three strategy workstreams. There’s a lot of work happening right now and planned for 2021, but there’s another eight years of this strategy to design and implement. I hope that in five years I’ll be just as excited to continue that work, and all the great ways we’ll be able to make a real impact in the U.S. as part of our 3 by 30 goals. 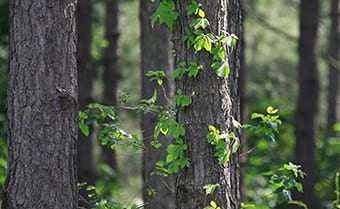 We offer a range of exciting career opportunities for talented people who are passionate about making a difference.