A billboard near Salem, Oregon. Led by the Oregon Forest Industries Council, Oregon Forests Forever is a growing statewide coalition of individuals, organizations and businesses that support active, sustainable management of Oregon's forests.

Environmental groups and the timber industry are often painted as bitter adversaries. But the passage of the Private Forest Accord in Oregon earlier this year is a great example of how these groups can work together for the benefit of all. On May 18, Oregon Governor Kate Brown signed the Private Forest Accord, a historic agreement that resulted in the most comprehensive changes to Oregon’s forestry regulations in decades.

Now, a new state-wide awareness campaign called “For the Trees” celebrates this important moment while working to increase the general public’s awareness and understanding of today’s modern timber industry. 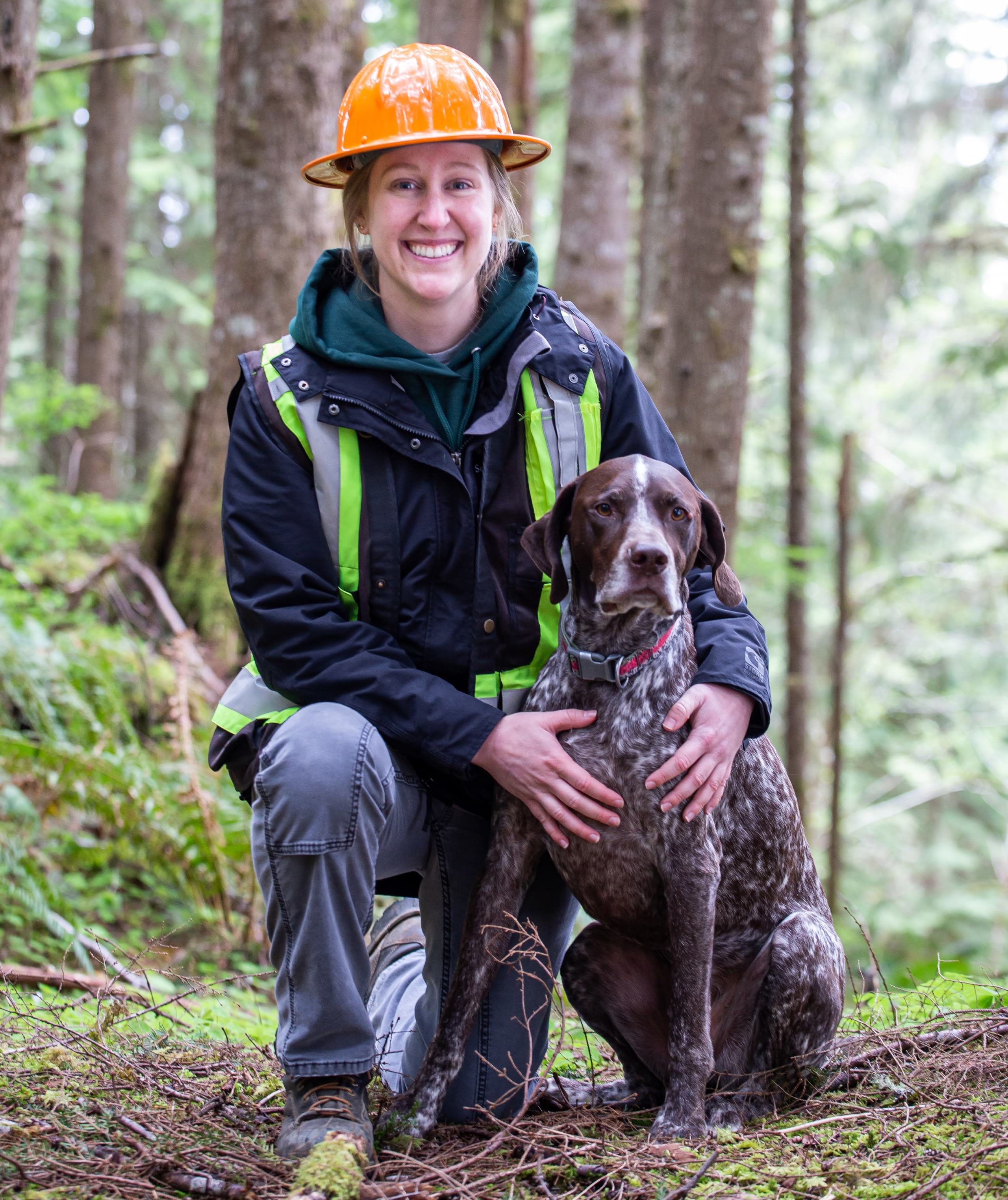 “The campaign advocates for our company and our industry while also demonstrating the many values we share with environmental groups and the public at large,” Anya says.

The For the Trees campaign uses video clips, social media vignettes, a blog and print advertising on billboards, buses and even coffee sleeves to highlight the ways companies like ours contribute to solutions for the issues Oregonians care about most: Climate change, wildfire prevention, affordable housing, a healthy environment and economic opportunity for rural families.

“Forestry isn’t just cutting down trees,” Anya says. “It requires maintaining sustainable forests far into the future. Protecting the environment is crucial to the survival of our industry, but not everyone in the general public realizes that.” 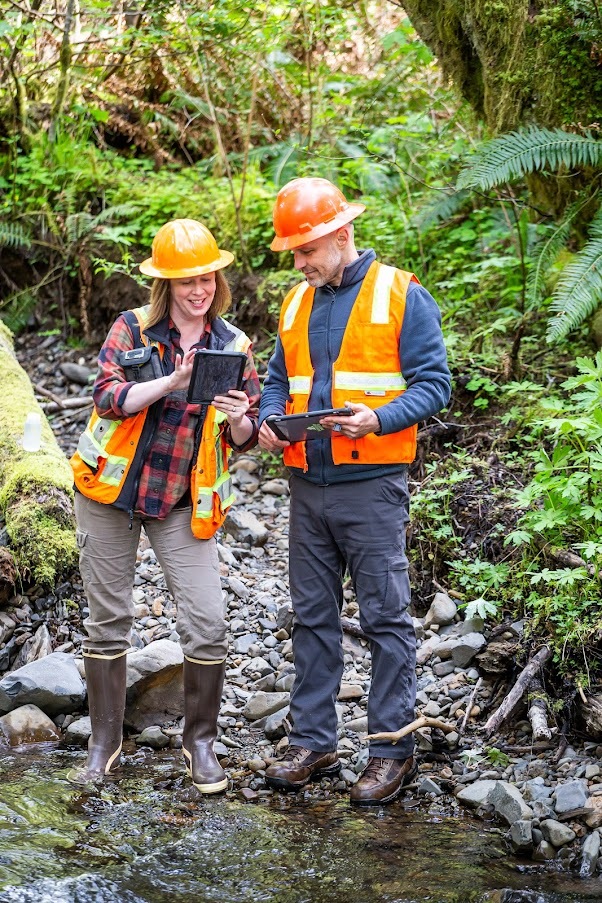 Rachel Pirot, engineering geologist; and Mark River, hydrologist. 'The wardrobe coordinator was so excited about our gear,' Rachel says. 'She was thrilled by how "authentic" it all was, which made us laugh. She held my beat-up field vest and said, "Wow, this is so great. Such texture."’

GETTING REAL ABOUT REPLANTING

Anya was one of the first people recruited for the campaign by Sara Duncan of the Oregon Forest Industries Council.

Anya and a fellow member of the Society of American Foresters, Fran Cafferata Coe, a consulting wildlife biologist, spent a spring day filming near the town of Seaside on the Oregon coast. The film crew initially asked Anya to talk about regeneration and replanting while standing in a forest that was about 10 years old.

“That wasn’t realistic enough for me,” Anya says. “The public doesn’t want us to sugarcoat or pretend we don’t clearcut. So I said, ‘Let’s address this head on and explain that the forest may look barren now, but there are more seedlings planted here than what we harvested.’”

The crew moved locations, and Anya filmed a social media clip discussing how foresters act as stewards of the environment.

“There weren’t any actors representing the timber industry in the campaign videos,” Anya says. “Instead, we were all people with a personal stake in the forest products industry. It felt great that the crew took my input about filming location seriously.” 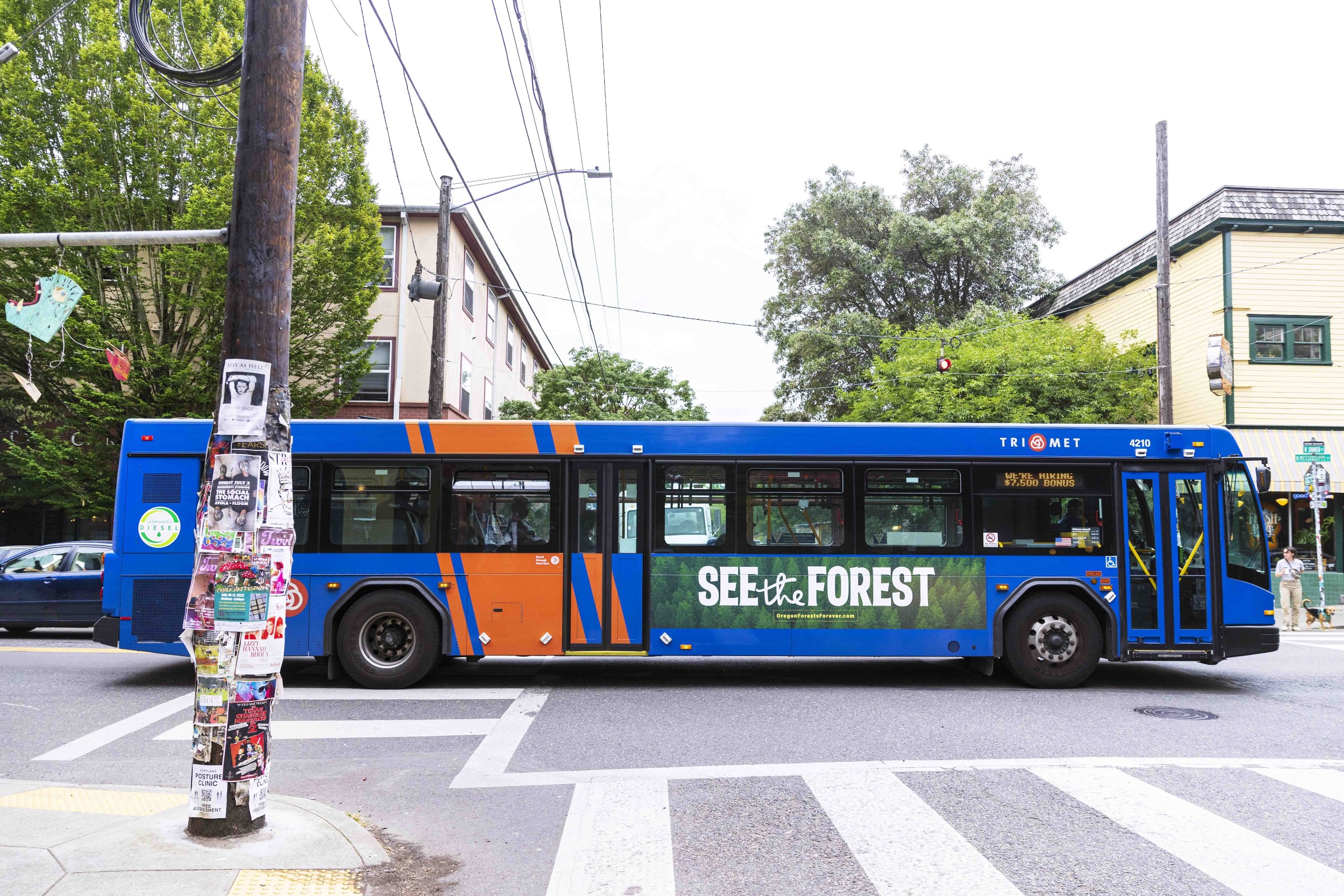 A bus in Portland displaying a version of the For the Trees ad. 'I haven’t run into the ad in the wild yet, but my parents love it and sent it to everyone they know,' Anya says. 'I didn’t tell anyone ahead of time, so they were all shocked and excited. I was a little mortified, but also proud to be a part of it.'

Rachel and Mark also filmed their part of the “See the Forest For the Trees” commercial on the Oregon coast, wearing their own clothes and field gear.

“They wanted to feature a variety of people who work in Oregon’s forests, including scientists,” Rachel says. “So we stood in a stream and demonstrated some of our job functions.” 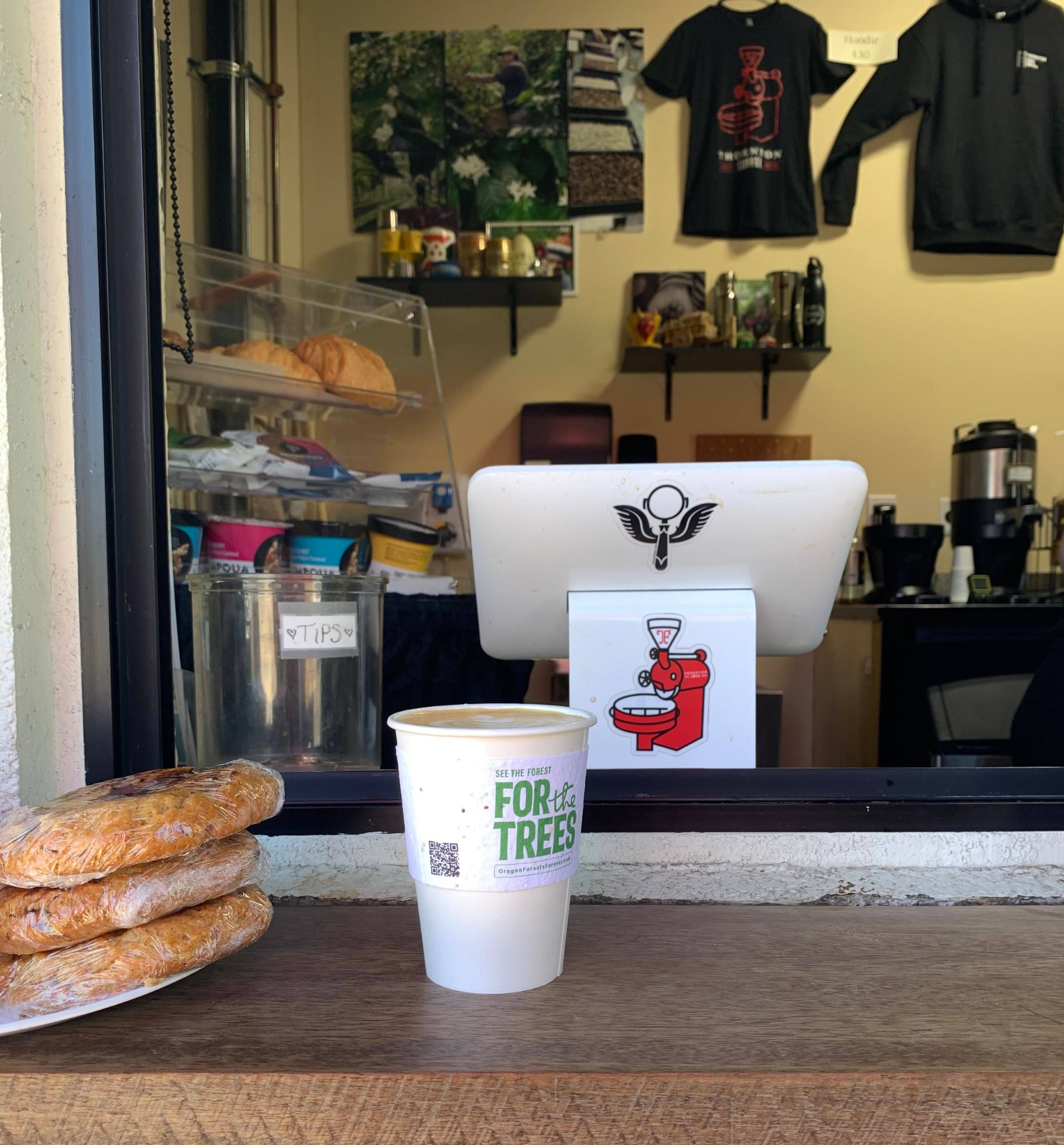 A For the Trees coffee sleeve distributed at Thornton Family Coffee Roasters in Beaverton, Oregon.

“They also filmed people who aren’t in the industry, like hikers, to show the variety of people who use and care about forests,” Rachel says. “That’s what’s great about this campaign. It focuses on what brings us together and on our shared values.”