The Governor’s Office, mediator Peter Koehler, and Peter Harkema from Oregon Consensus, facilitated as the parties worked toward a deal. A 196-page report was also prepared; this is its cover, courtesy of Gareth Curtiss.

When Oregon Gov. Kate Brown announced a landmark agreement last fall to revise the state’s Forest Practices Act, it was a big win for both the environment and rural communities that depend on a thriving forest products sector.

“Today’s historic agreement is a perfect example of the Oregon Way — coming together at the table to find common ground, to the mutual benefit of us all,” the governor said in an Oct. 30 media release. “I would like to thank everyone involved for their role in making this agreement a reality today.”

Called the Oregon Private Forest Accord, it’s the result of nearly 18 months of intense negotiations between 13 conservation groups and 13 private forest owners, including Weyerhaeuser. It covers 10 million acres of privately owned timberland in the state and includes measures to protect fish and amphibians, introduces a process to make future updates to the Oregon Forest Practices Act, and more.

FROM DUELING BALLOT MEASURES TO A PATH FORWARD

The journey that resulted in the accord started in 2019, when several bills stalled in the state legislature and environmental organizations introduced ballot initiatives to protect aquatic species.

These proposals threatened the vitality of the forest products industry, a cornerstone of Oregon’s economy, especially in rural areas.

“If those initiatives had passed, the impact would have been devastating on our rural operating communities where logging often provides secure long-term jobs,” says Kristen Sawin, vice president of Corporate and Government Affairs.

In response to this threat, the forest products sector introduced its own ballot measures. But a clear path forward was fraught with risk and uncertainty — and too little cooperation and understanding between the parties involved.

“We owed it to the people of Oregon to find a better way,” Kristen says. “Since we started operating here in 1902, we’ve championed both working forests and the environment. We fundamentally believe that a robust forest products sector and healthy forests and wildlife can coexist.”

To that end, several industry CEOs, including Devin Stockfish, reached out to Gov. Brown in late 2019.

They told the governor they were willing to put the industry’s ballot initiatives on hold if the environmental and conservation groups would do the same. In return, the CEOs offered to enter good-faith discussions to find common ground and implement long-term solutions.

The governor’s office agreed to broker negotiations between the parties, and after a few weeks of intense discussions, the governor announced that the parties had signed a memorandum of understanding.

“The MOU detailed the next steps forward,” says Kristen, who represented Weyerhaeuser during this phase of negotiations. “It provided a framework to end gridlock and truly work together.” 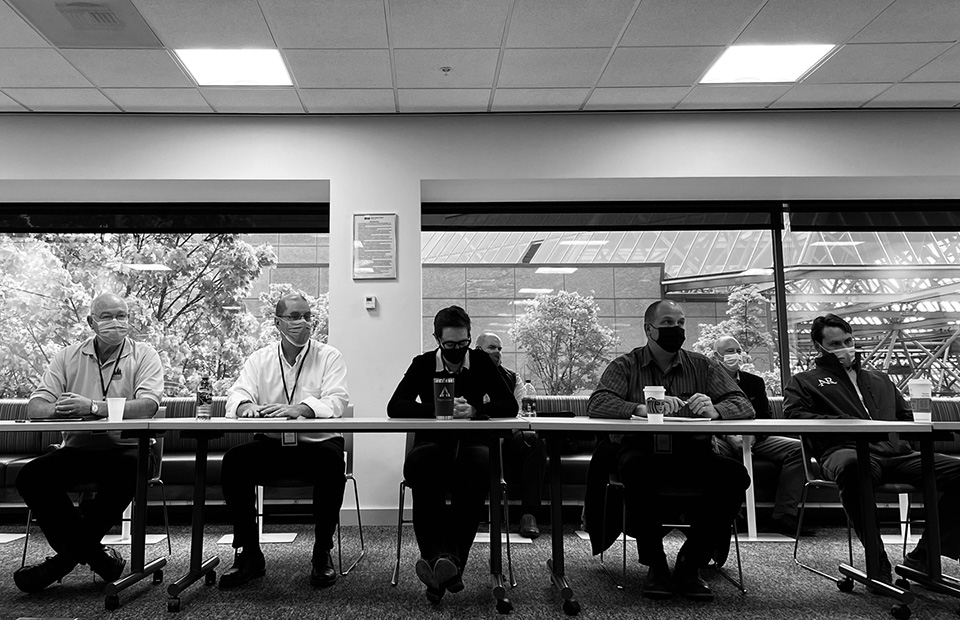 Diane, center, represents Weyerhaeuser in negotiations. The Private Forest Accord heralds a new era of cooperation for the common good. When it comes to Oregon’s forests and fish and wildlife, passions run high — and have led to gridlock in the past.

One early success outlined in the MOU became groundbreaking legislation passed in June 2020. It addressed the aerial application of herbicides, which we apply to new stands to reduce vegetative growth that competes with seedlings for water and nutrients.

The new law expanded no-spray zones around homes, schools and other sensitive areas. It also created a first-in-class method to notify nearby residents just before and after applications occur

“It was not only the right thing to do, but it also showed that industry and environmental organizations could effectively work together for the common good,” says Betsy Earls, Oregon public affairs manager.

SETTING THE STAGE FOR PROTECTIONS AND STANDARDS

Once the MOU was signed, 18 months of grueling negotiations of the Private Forest Accord began.

“The accord was one of the most difficult projects I’ve ever been involved in,” says Diane Meyers, vice president and assistant general counsel, who represented Weyerhaeuser in negotiations starting in March 2020. “There were hard conversations, every day, with many different people — with industry members, environmental organizations and agencies. But I believe over time the result will prove to be one of the most gratifying. It was a long, intense process that included a lot of compromises — all parties had to give something — but the accord will provide more long-term certainty for rural communities. It should make Oregon proud.”

The accord also introduces a science-based process for making future updates to the state’s Forest Practices Act.

Through last fall and January of this year, the accord negotiating team worked with Oregon’s nonpartisan Office of the Legislative Counsel to draft legislation — which passed the Oregon Legislature on March 3 — to turn the Private Forest Accord into state law. The team also prepared a 196-page report describing in detail the changes that were negotiated.

GETTING THE FEDS INVOLVED

The state will also seek federal approval of an umbrella Habitat Conservation Plan for the 10 million acres of private forests covered by the accord. HCPs are mechanisms under the U.S. Endangered Species Act that allow activities such as forestry to take place as long as they are consistent with approved management practices.

The rigorous HCP submission process will take years to complete. HCP applications must be supported by research, including environmental impact statements, and are subject to public-comment periods and revisions.

However, once approved, the HCP — which would last for 50 years — will offer Oregon’s private forestland owners regulatory certainty. At the same time, it will ensure that forest management practices provide adequate protection of threatened and endangered species.

“We are at least five years away from the finish line for the accord,” Diane says. “We have laws to pass, rules to draft, models to run, research to do, and an HCP to submit, but I’m encouraged we’ll get it done. We’ve found a model for Oregon’s future where industry and environmental organizations come together, engage in meaningful dialogue, and collaborate to solve problems together. That is already a win.” 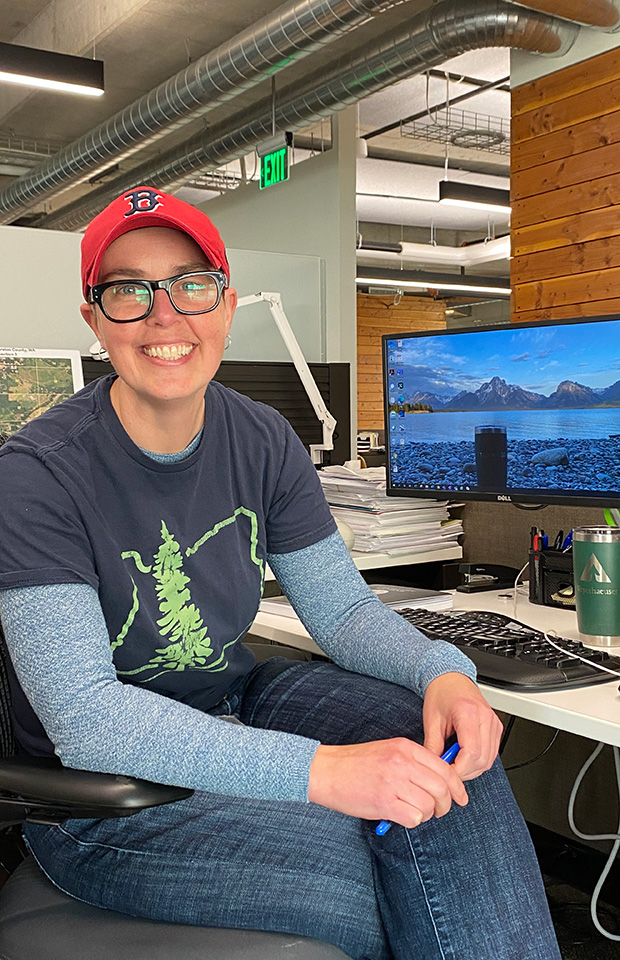 Diane Meyers in her lucky Oregon t-shirt. “I had the unique opportunity to work alongside our impressive, passionate group of Weyerhaeuser colleagues, who taught me so many things about our history, our operations and the science driving our work,” she says.

PARTIES TO THE PRIVATE FOREST ACCORD

Also joining in the agreement are the Beyond Toxics, Cascadia Wildlands, Northwest Guides and Anglers, the Oregon League of Conservation Voters, the Oregon Stream Protection Coalition, The Pacific Coast Federation of Fishermen’s Associations, Rogue Riverkeeper and Umpqua Watersheds.

WHAT OTHERS ARE SAYING ABOUT THE PRIVATE FOREST ACCORD

“There is a lot in this deal. Let me say we tried to get a lot more, and made some painful compromises. But on the whole, we decided to agree, because we all recognize that constant gridlock serves no one: not the timber industry, and certainly not Oregon’s forests, fish, wildlife, and communities.”

Rivard added, “The only way forward on issues related to management of Oregon’s timber lands is a collaborative approach. We salute Gov. Brown’s strong leadership in this effort, and the commitment of our fellow negotiators to persevere until we were able to reach this hard-won agreement, which will help sustain Oregon’s unique natural heritage and the fishing industry that depends on it.”

“There will be hard work ahead transforming the agreement into laws and rules, but both sides are committed to working together to make that happen. If we can sustain the goodwill and partnership that the Forest Accord seeks, that could be the most important benefit for Oregon of all.”

“I think we’re all really proud to be part of a new era of forestry in Oregon.”

— Adrian Miller, of Rayonier, as quoted by the Associated Press