You appear to be using an older browser. This website is best viewed using the latest versions of Internet Explorer, Chrome, Safari, and Firefox. If you proceed without upgrading or switching browsers, you may not experience optimal navigation or page functionality. Thank you for your interest in Weyerhaeuser and we hope you enjoy your visit.

When the skies turned from red back to blue and the ash stopped falling in September, the community of Molalla could finally breathe: After 13 grueling days, the fires that threatened the town and its neighbors in one of Oregon’s worst fire seasons in memory had been contained.

The sense of joy and relief among neighbors was palpable.

Jill Bell, Alsea area manager, is one of those neighbors. She lives just outside Estacada, a rural community of about 4,000 people nestled in the Cascades foothills about 20 miles from Molalla.

In late August, it appeared to Jill and her neighbors and coworkers as if the 2020 wildfire season would be modest. But then the Tuesday after Labor Day, as Jill was driving south to Alsea, about 90 miles away, she ran into a wall of smoke near Salem.

“It was dark, dark, dark,” Jill says. “The sheer scope of the wildfires became very real in that moment. Things had gotten bad fast.”

The day before, Sept. 7, the easterly winds began blowing. These hot, dry winds don’t come every year, but wildfires tend to explode when they do. This year, the easterlies arrived with a fury, gusting from 50 to 75 miles per hour at higher altitudes.

Though there were no fires on Alsea, not long after Jill got home on Tuesday her house was put under a level 2 fire evacuation warning, meaning residents must prepare to leave. A new fire, called Riverside, had broken out nearby and was spreading fast due to the easterlies. Jill and her husband hurried to pack and find a place to board their cherished goat herd. They cut down four large pine trees overhanging their house and helped some friends and neighbors.

Within hours, authorities raised the region's evacuation alert to a level 3 — leave immediately. Jill and her husband headed for his parents' house.

By Wednesday, the Riverside fire had spread to Weyerhaeuser's Clackamas tree farm.

"I was feeling helpless and wanted to pitch in closer to home," Jill says. "I asked if I could help the Clackamas team — the tree farm is just up the hill from Molalla."

The answer was an immediate "yes." Tyson Losli, Clackamas area manager, and his team were already worried about the Beachie Creek Fire on the south side of the tree farm when the Riverside fire broke out on the north. At first, they focused on moving equipment and people out of harm's way, waiting for winds to die down and state firefighting crews to arrive.

The Oregon Department of Forestry is typically responsible for fighting wildfires, including those on private land, and private landowners pay an assessment fee to support those firefighting efforts. But state firefighters were already spread thin and didn't have the people or resources to fight yet another fire. At one point, there were only 3,000 firefighters on hand — less than half the number needed. State authorities were facing the possibility of allowing the Beachie Creek and Riverside fires to merge.

“If that happened, we’d likely lose the entire Clackamas tree farm,” Tyson says. “Even more concerning, the town of Molalla and many other rural communities and homes would be at risk of total devastation.”

Late Wednesday, the day after Jill and her neighbors evacuated, the easterlies were subsiding. And Tyson wasn't willing to just give up. After surveying the property and the fires, he believed it was possible to contain them safely.

On Friday, with approval from state and federal authorities, he and about 40 employees and contractors went up the hill into the tree farm to dig fire lines by machine and hand. Over the next several days, the team would grow to more than 170 people. Jill worked in our Molalla office managing logistics and coordinating with government authorities.

"We've managed smaller fires, usually spot fires, but never fires on this scale," Tyson says. "There was a lot to learn in a short amount of time."

Scott Marlega, Willamette Valley land use manager, identified people such as Michelle Metcalf, a recreation access manager based in Longview, Washington, and Jess Laney, a GIS analyst in Oregon, who could help with the firefighting. Michelle had more than a decade of experience mobilizing fire response for the Washington Department of Natural Resources prior to her Weyerhaeuser career. And Jess secured daily satellite infrared maps to track the fires’ movements. Other employees from Washington and Oregon jumped to help, too, including Mary Castle, minerals manager; Mike Rochelle, environmental research manager; and James Benson, progeny test coordinator.

On the hill, the 18-hour days were grueling, with smoke and soot creating low visibility. Few had experienced anything like it. Several times the fire jumped the day's established fire lines after teams had come off the hill due to poor visibility and darkness. Undeterred, they went back each morning and kept dozing and digging and stringing. In just a few days, they established miles of fire lines and had strung miles of hose.

It took 13 days of backbreaking work, but they were able to contain the two fires. Some 18,000 acres of the Clackamas tree farm were saved, along with Molalla and its neighboring rural communities and homes, including Jill's. And, most importantly, countless lives and livelihoods were saved, too. 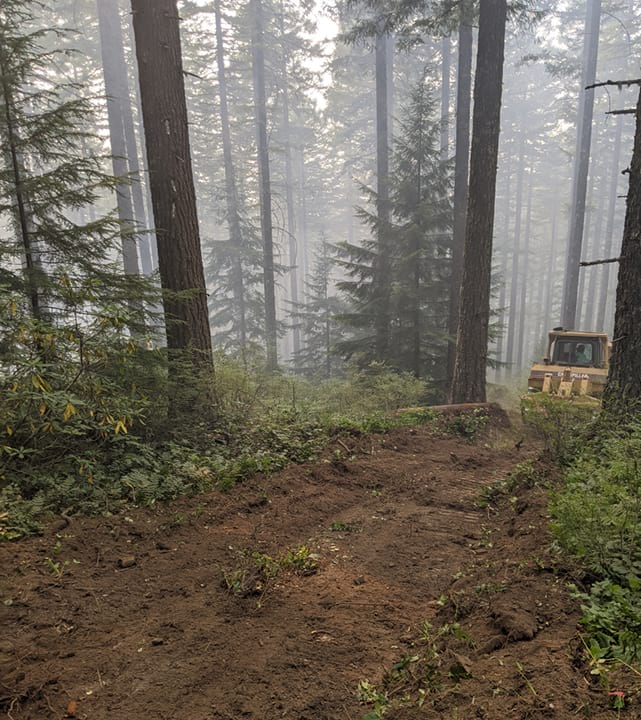 Our firefighting team dozes a fire line to prevent the advance of the Beachie Creek Fire. To do so, a dozer boss goes ahead of the machine to mark a pathway through the terrain. The goal is to blade all organic material off the trail, leaving only mineral soil (unburnable material) so the ground fire can’t advance. But dozers are limited by terrain. If machines couldn't navigate it, the team dug the lines by hand.

Looking back, Jill says that much of the work is a blur, but the people — especially the neighbors — stood out.

The local office of the Oregon Department of Forestry was closed due to a Level 3 evacuation order, so neighbors stopped by our Mollala office for news. State fire marshals came to review our detailed maps. Private firefighters asked about the locations of water reservoirs so they didn’t have to go down the hill to refill their trucks.

That community support went both ways. Molalla High School teachers, led by Dianna Steach, brought hot, homecooked meals to the office for nine days — enough for every firefighter coming down the mountain each night. Even though the local stores and restaurants were closed, the meals were waiting: Tamales and chili and burgers and hotdogs and more.

The food filled everyone's bellies, and the sense of community lifted everyone’s spirits.

"They did it because they’re awesome people," says Ginger Simmons, a Clackamas administrative assistant, who liaised with the teachers. "The meals were the highlight of some very long, difficult days."

A CIRCLE OF CARING

In appreciation, Tyson and Steve McNulty, region manager, presented a $10,000 donation from the Weyerhaeuser Giving Fund to the high school's general student fund in early December. Dianna and many of the teachers were at the socially distanced event.

"There were several gasps of joy," Ginger says. “The schools have been struggling with COVID and resources. And they all know the fires hit Weyerhaeuser. But for all of us, this was a moment to reflect on how we’re all part of this community, how we depend on each other — and how we’ve got each other’s backs." 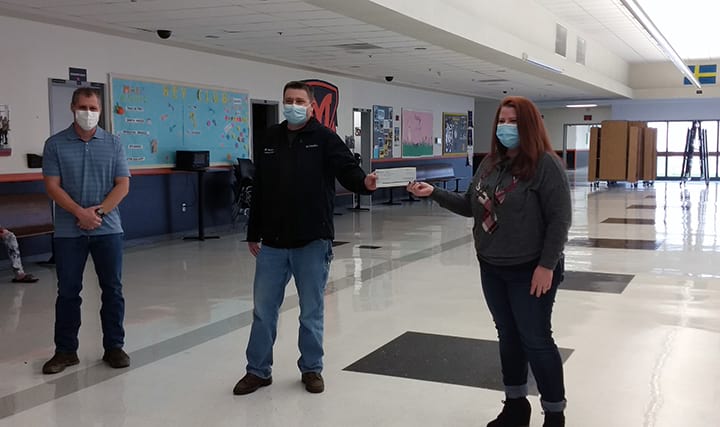 In appreciation of the teachers, Tyson Losli and Steve McNulty present a check of $10,000 for the high school’s general student fund. Dianna Steach, right, accepts the donation of behalf of the students.

Volunteer of the Year Ginger Sajna focuses on helping individuals