'It’s been a big transition for my family as well,' Shaun says. 'I moved to Tollette in 2008 and my parents got used to me being available all the time. After I bought my property, I eventually put a mobile home on it, and they would always visit. We’re very close, and we’d always go out to dinner or run errands together. Now, I visit about once a month. We have to plan things a little differently, but we still get that important quality time.'

Shaun Clark never thought he’d leave his community of Tollette, Arkansas. He owned his dream property there with his husband, Alan, a house on peaceful acreage with horses and three dogs. He loved the area, and his parents lived just a few steps away.

It was also a fairly easy drive to his job as safety manager at our lumber mill in Dierks, Arkansas. But when a new opportunity became available — one that would finally allow Shaun to immerse himself in his true passion and training in human resources — he had to make a major decision, and potentially a major move.

“I nervously said, ‘Hey, Alan… you wanna move?’” Shaun says. “Without hesitation, he said, ‘I’ll go wherever you want to go. I’m an EMT, I can get a job anywhere.’”

So in November 2021, Shaun made the transition from safety manager at Dierks to human resources business partner at our veneer and plywood mill in Emerson, near the Arkansas-Louisiana border. He was excited to get to work helping people in their roles and careers, but his arrival couldn’t have come at a more challenging time.

“The phrase that stuck with me was, ‘Step out on faith,’” Shaun says. “I’ve longed for this role for 13 years. I had to trust that it would all work out, and it did.” 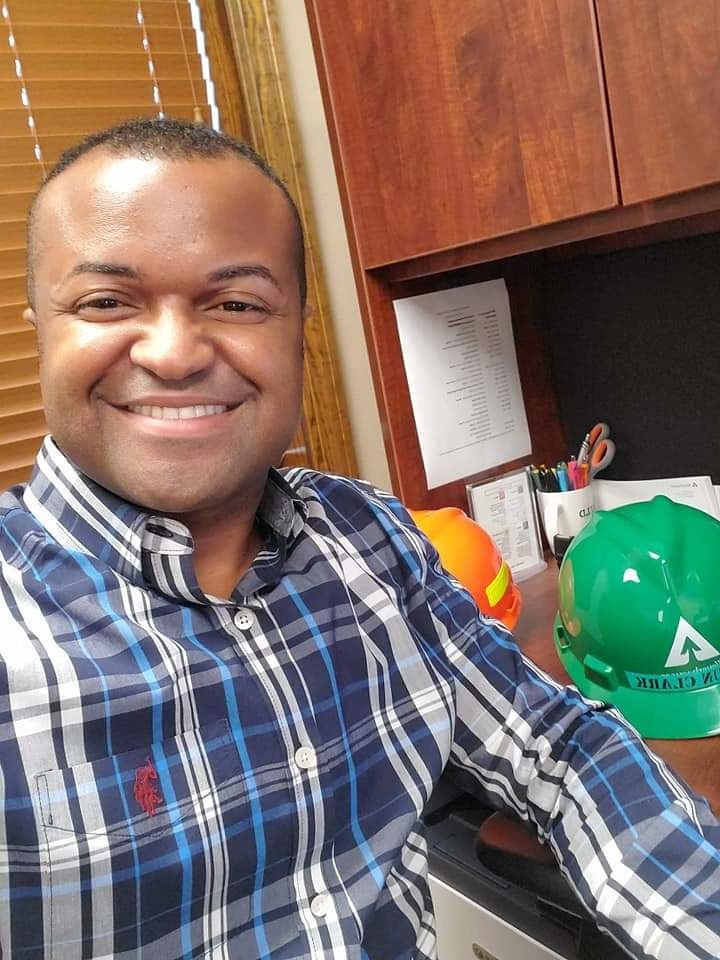 'I’m excited to learn everything about this profession and seek development opportunities that will make me better at my job,' Shaun says.

A FEW STOPS ALONG THE WAY

As an undergraduate at Arkansas State University, Shaun studied management with a focus on human resources and worked a few internships in the HR divisions of local manufacturing companies. It was a great fit for his warm, friendly and open personality. But just as Shaun graduated in 2008, the Great Recession hit.​​​​​​​

“Very few opportunities were available, and when I applied for the rare relevant HR openings, I was passed over,” Shaun says. “Hiring committees always told me I had the education but not the experience. It was disappointing, to say the least.”

Shaun pivoted to a career in higher education and obtained his master’s degree before starting at Husqvarna Forestry Products in 2017, first as a business analyst and then as a safety and environmental engineer. By late 2020, Shaun was ready for a more managerial role, and he became the safety manager at our Dierks lumber mill that December.

“For a while, I thought maybe safety is really my niche,” he says. “But eventually I realized I was just coasting, not really challenging myself to reach my true potential.” 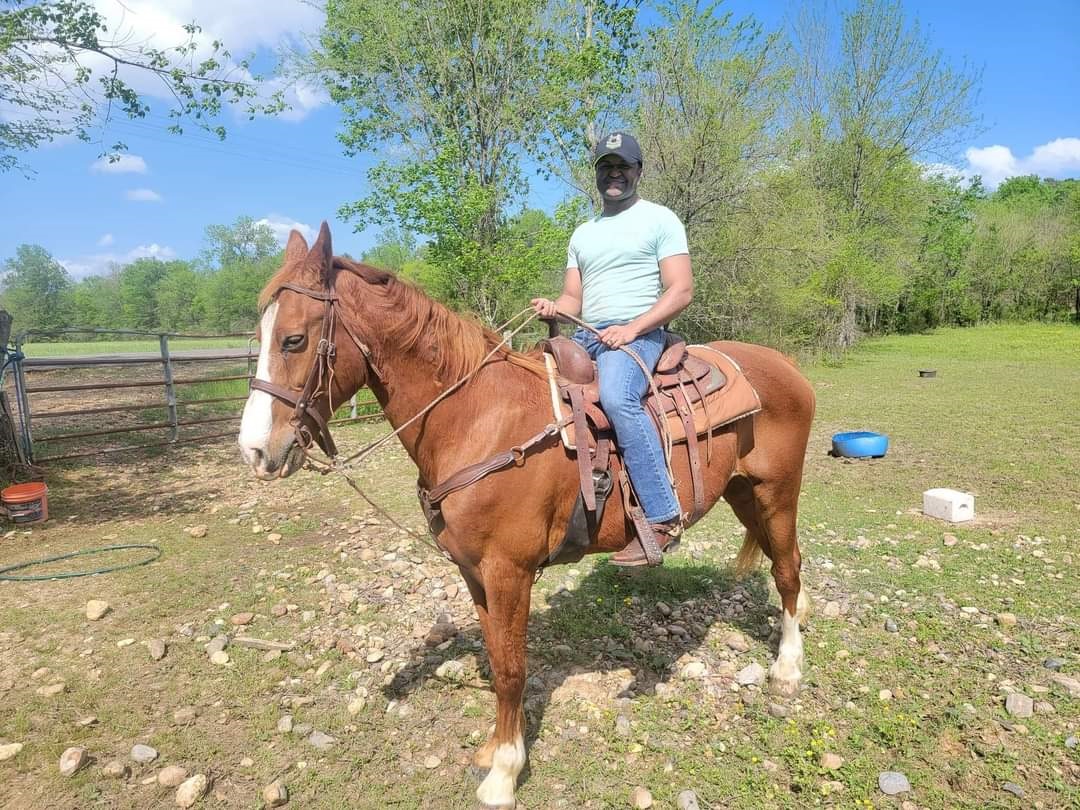 Shaun on his horse Pegasus. 'I love to ride my horses and my four-wheeler all over my property. I’m also really into video games, especially classics like Mario and Mega Man.'

He’d only been in his safety role for about a year when the HR business partner opening in Emerson was posted. Shaun reached out to his friend Lilly Bell, senior human resources business partner based at our sawmill in Dodson, Louisiana, and she encouraged him to apply.

“I so appreciated both Lilly’s encouragement and then being given the opportunity by Akilah Lewis (HR director for EWP and raw materials),” Shaun says. “Akilah’s been instrumental in developing me in my new role, and I thoroughly enjoy working with her.”

But accepting the role meant leaving his dream home in Tollette, which was too far to commute each day.

“I didn’t want to give up my home and my animals, so I asked my brother to move in and take care of the place,” Shaun says. “That made it a little easier to move to our new town of Magnolia, an hour and a half away.”

He was relieved that gaining a foothold in human resources didn’t require a move out of state. And he grew up in Nashville, Arkansas, which he says is about half the size as Magnolia and very culturally similar.

“Everyone is so friendly and close-knit, and I love that,” Shaun says. “My colleagues Rhonda Triplet and Sheila Nash are both really involved in their respective communities of Emerson and Magnolia, and they’ve helped me connect to people. My husband and I also met another couple, and we like to dine at local restaurants, visit the arts districts and walk around town.” 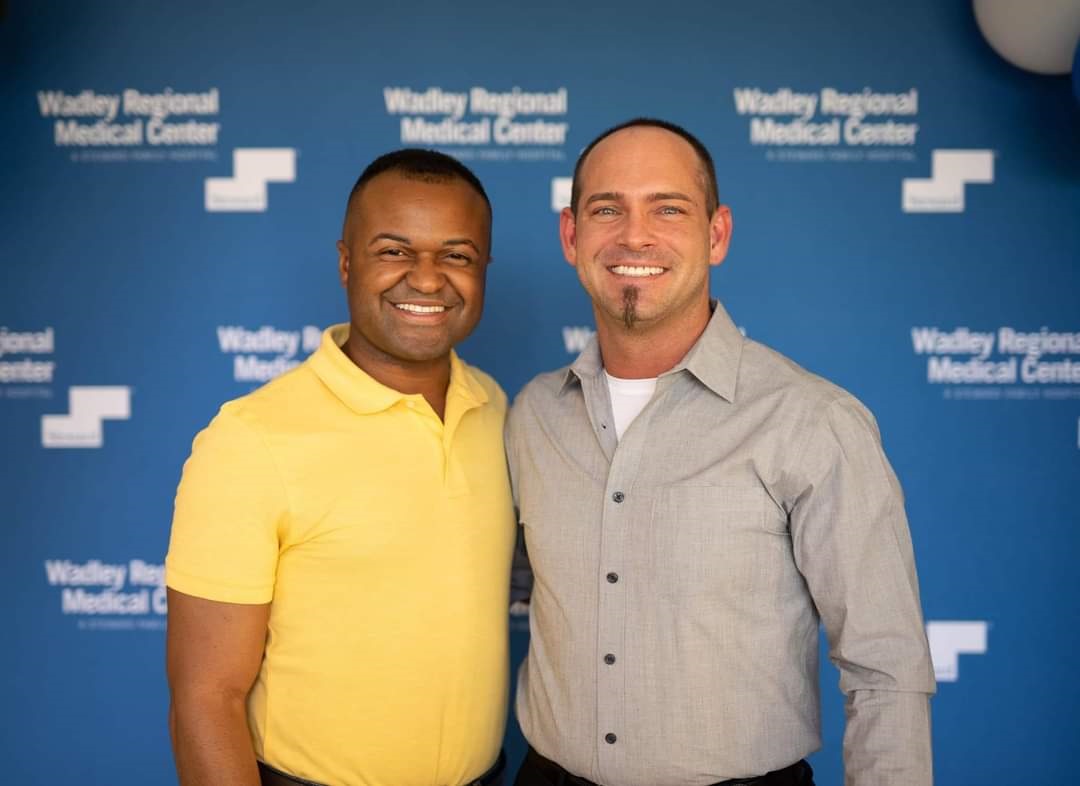 Shaun and his husband Alan.

Shaun’s arrival at Emerson late last year came at a pivotal moment. The site had experienced a major disruption when a building collapsed after a freak snowstorm in February 2021. No one was hurt, but a portion of operations for the plywood division shut down entirely, displacing employees to new roles. Union negotiations with employees were ongoing, plus there were many contracts to review and positions to fill.

“I’ll admit, I did wonder what I’d gotten myself into,” Shaun says. “A lot of us at Emerson were new to the company or to our roles, but we were in it together. It took a lot of work, learning and relationship building, but in the end, we made over 80 job offers for various roles in production and leadership.”

As challenging as the circumstances were, they allowed Shaun’s people skills to properly shine. Plus, he loves his new team.

“We’re probably one of the most diverse leadership teams within Engineered Wood Products,” Shaun says. “I’m a gay Black man at a site with other Black and gay employees, and that means a lot. So many of us come from different backgrounds and life paths, and I think we’re stronger for it.” 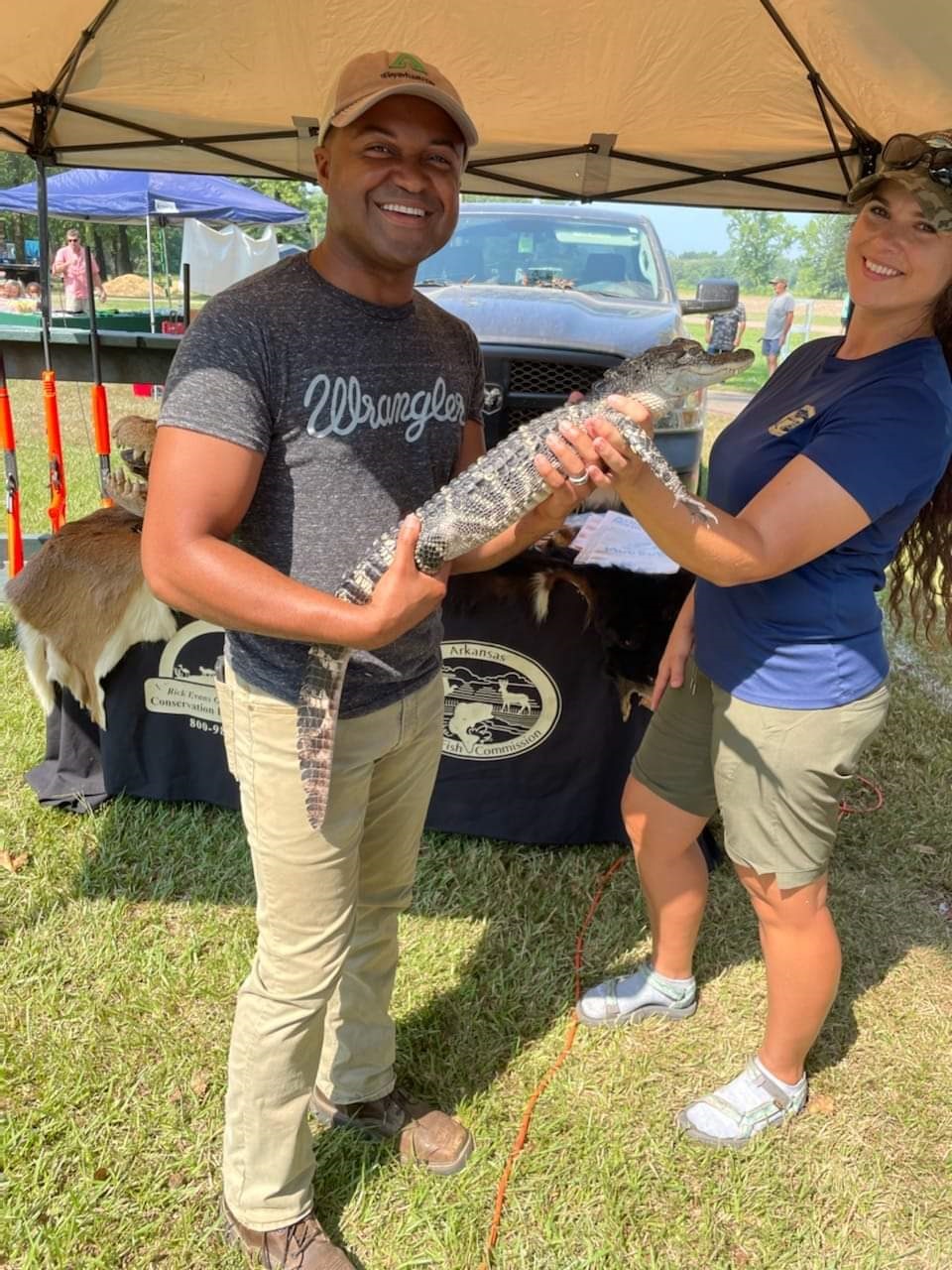 Shaun gets up close and personal with local wildlife while representing Weyerhaeuser at the Dierks Pine Tree Festival. The baby alligator was courtesy of the Arkansas Game and Fish booth!