Like other company locations, our Timberlands office in Lynchburg, Virginia, receives a yearly allocation from our Weyerhaeuser Giving Fund for local distribution. And also like many other locations, the close-knit, six-person group is always looking for ways to build on those donations by sharing their time, experiences and memories together.

“We’d done group service events together years ago at a food bank and really enjoyed going beyond just giving out corporate dollars,” says Ben Kobek, area manager. “We had to put plans on hold because of the pandemic, but we still wanted to find a cause we could support through our sweat equity.”

Last year, they recognized a perfect opportunity to do just that when DePaul Community Resources submitted a Giving Fund grant request. The organization’s mission of supporting children, families and individuals with disabilities hit home with the Lynchburg team.

“DePaul’s grant application stood out because the money would be used for a program that helps people of color foster children and adults with disabilities,” Ben says. “Everyone in the office really liked DePaul’s inclusive mission, so we decided this was where we wanted to go further and support them with our time, too.” 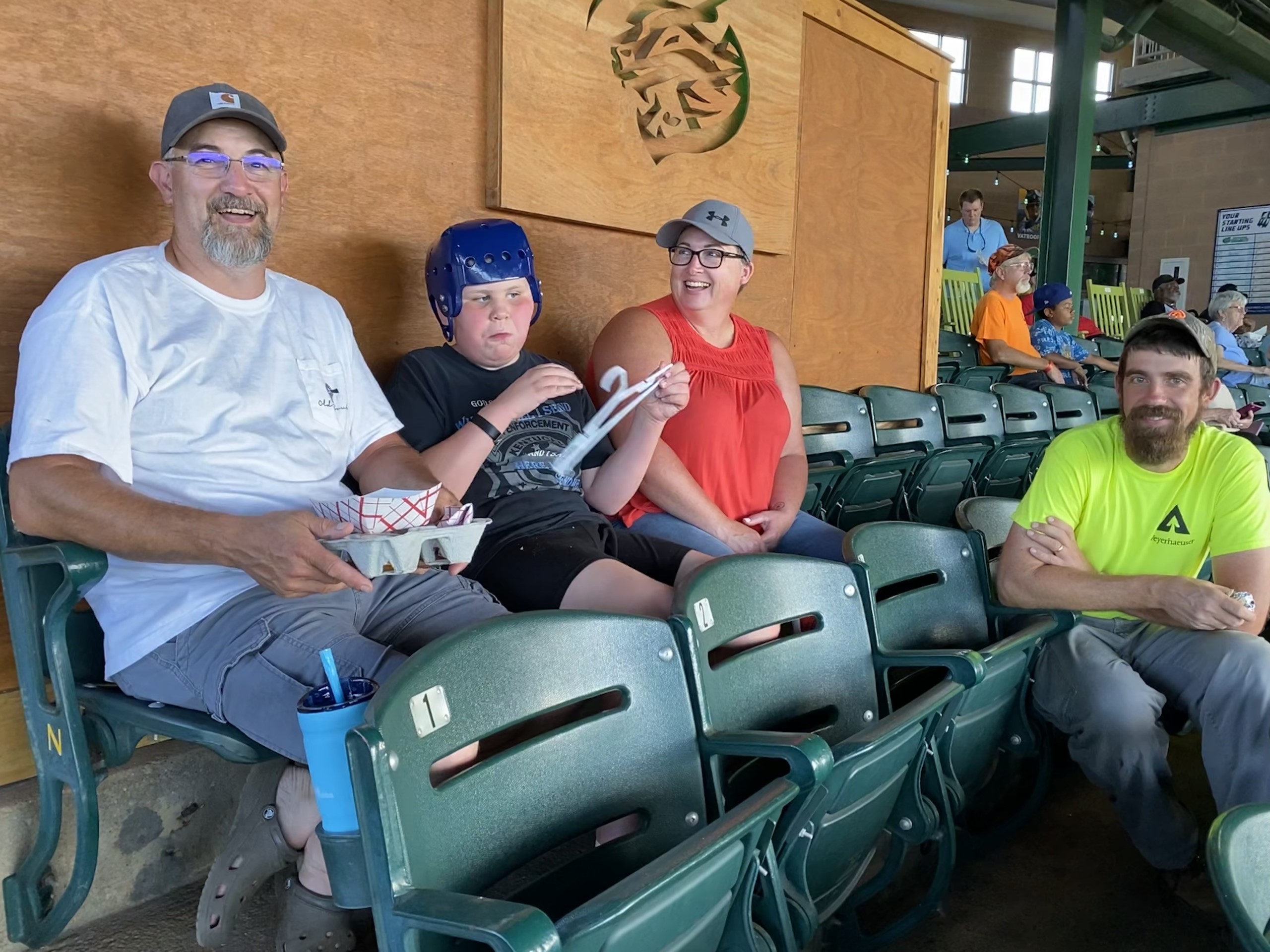 Andrew Brown, far right, chats with one of the DePaul families at the game.

The team sent DePaul a grant for $2,000 and began brainstorming ideas to provide additional support for DePaul in a way that everyone in the office could be involved.

“We kept going back to how these foster families have a tough assignment, spending 24 hours a day taking care of someone who’s not related to them,” says Andrew Brown, environmental management systems manager. “That resonated with us. We have a small group in our office, and when there’s work to be done, we all band together to pitch in. But we’re able to take time off and recoup when we need to. These families don’t get breaks.”

The desire to create a fun, shared experience for the families and DePaul’s clients led the Lynchburg team to another local organization they’ve supported for a while: Lynchburg’s minor league baseball team, the Hillcats.

TAKE ME OUT TO THE BALLGAME

On July 28, the Lynchburg team sponsored a day at the ballpark. They invited their own families, their intern, a few employees from our North Carolina Timberlands office, and a group of DePaul’s clients and foster families to enjoy Hillcats baseball, ballpark food, and throwing out the first pitch.

“It was a fun break from what they do every day, where they could just enjoy themselves and make family memories,” Ben says. “And we were excited to share it with them.”

Ben remembers one young boy — nervous about going out on the field in front of a stadium of fans — who then clutched his souvenir baseball for the rest of the game. Andrew recalled another young gentleman who was nonverbal and had never been to a baseball game.

“I’m sure his family was unsure how the evening would go, but his face was lit up all night,” Andrew says. “Just getting to see a kid experience a ball game for the first time was special for me.”

Ben says their goal was to have everyone, including Weyerhaeuser employees and their own families, enjoy a good time that night.

“It was a great atmosphere,” he said. “We all sat together, families connecting with families. At one point Andrew was doing the hokey pokey with the young boy who’d been so nervous during his first pitch. The boy’s family joined in, then we were all standing up and doing the hokey pokey in the stadium. It was a golden moment.” 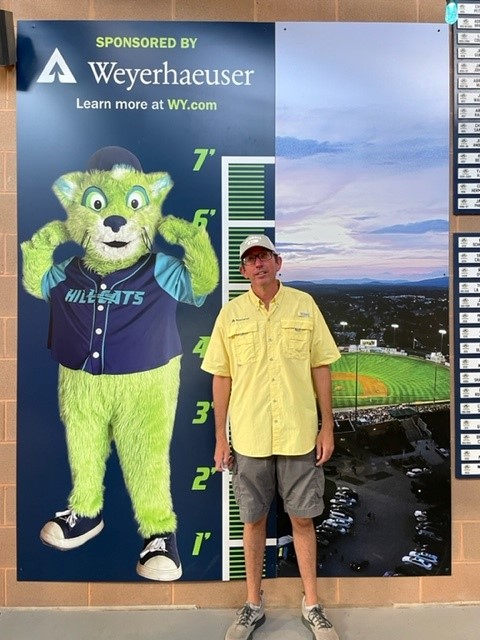 Ben Kobek, area manager for our Lynchburg Timberlands, measures up against the Hillcats growth chart.

The Lynchburg team plans to continue their support for DePaul by buying Christmas gifts for some of DePaul’s foster children this year.

“Our whole team sees this extra involvement as an opportunity to embrace our company values on a personal level,” Ben says. “As members of this community, we wanted to do more.”

And the personal involvement has already reaped dividends, both for DePaul and for the Lynchburg team.

“The ballgame event really paid off in terms of team and community building,” Andrew says. “It’s an experience we got to share together, something that’s now part of our team DNA.” 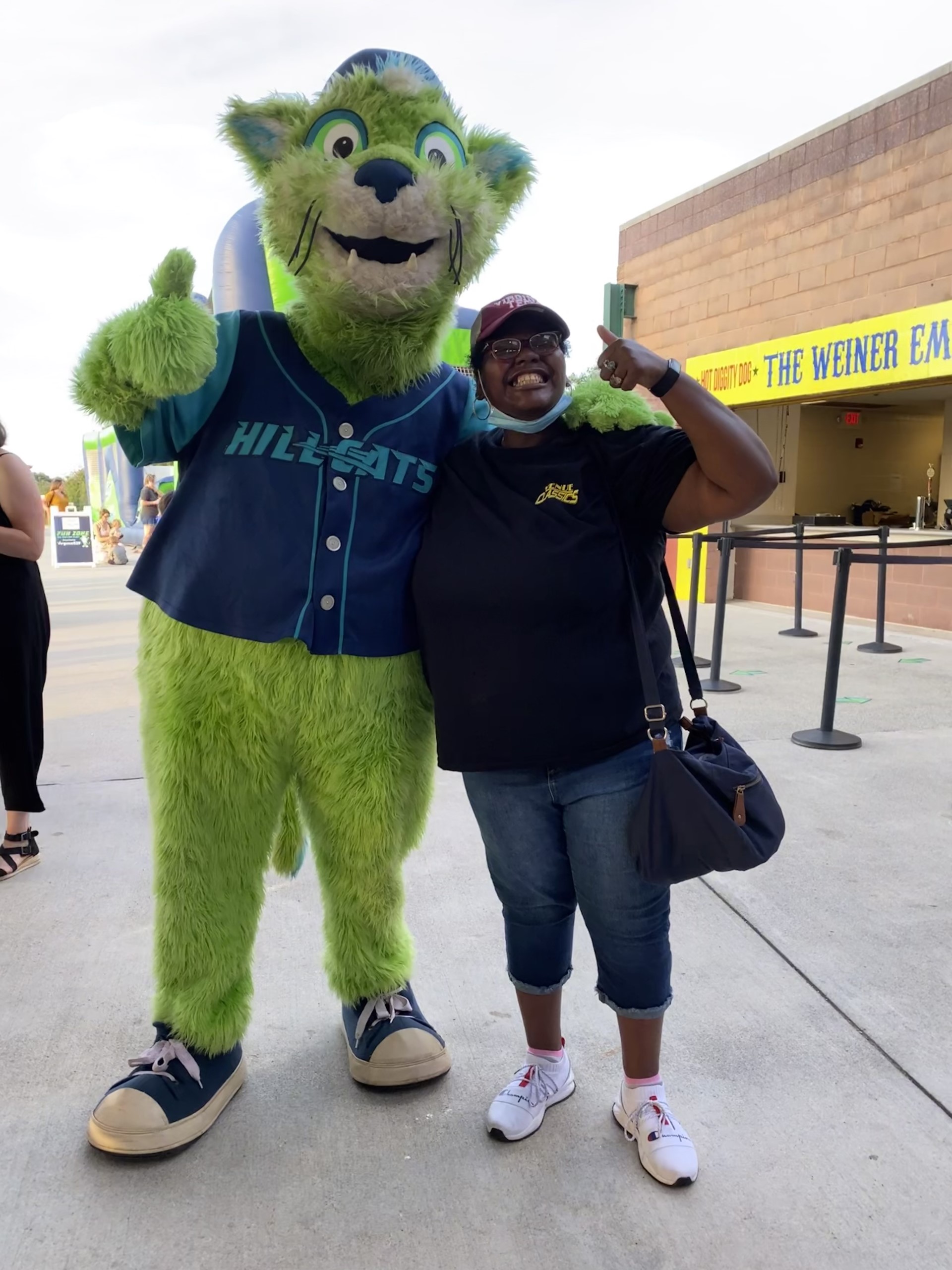 TIPS FOR GETTING INVOLVED

If your team wants to do more in your community but you’re unsure where to start, here are some tips from Ben and Andrew.