Restoring Oregon's forests: 'We’ll get it done, and we’ll do it the right way'

The full picture of devastation from Oregon’s fire season is only beginning to become clear. More than a million acres burned in September alone, destroying scores of homes and entire communities across much of western Oregon. Our timberlands were impacted by several of the fires, including around 125,000 acres that will need to be replanted. It will take years to recover and fully build back from a disaster of this magnitude, but that process is already underway for Weyerhaeuser — using a roadmap, in fact, from a similar catastrophe more than 40 years ago.

When Mount St. Helens erupted in 1980, the volcano leveled roughly 68,000 acres of our St. Helens tree farm. As soon as it was safe, our teams were out replanting within weeks of the disaster. All told, we planted around 18 million seedlings over the next seven years, and our forests returned far sooner than anyone expected.

The wildfires in Oregon have caused damage on an even greater scale, but our response strategy is the same: Salvage what can be saved, replant as quickly as possible to accelerate the forest’s recovery, and help restore all the benefits our timberlands provide, from clean air and water to wildlife habitat, recreation opportunities, sustainable wood products, carbon storage and so much more.

With nearly 125,000 acres burned, our foresters in Western Timberlands estimate it will take about four years of aggressive replanting to reach all affected areas. The overall goal is to complete replanting efforts as soon as 2024, and among the first acres to be reforested will be buffers along sensitive streams and connecting tributaries — all by the end of 2021.

Many of these streams feed municipal water systems and help provide clean drinking water for up to 100,000 residents in surrounding communities; others provide critical habitat for wildlife, including salmon. We have estimated that nearly 150 miles of these waterways will need replanted buffers, depending on fire severity, potentially amounting to about 2,800 acres of forested areas that will have little future harvest. These buffers are always an essential part of our commitment to environmental stewardship. Restoring them swiftly is even more critical to restart the process of securing streambanks, reducing erosion and filtering drinking water for local communities.

“We’re committed to replanting as soon as possible,” says Travis Keatley, vice president of Western Timberlands. “Forests are incredibly resilient, but a devastating natural disaster like this can set the ecosystem back for decades. It’s our responsibility to step in and make sure our forests grow back quickly — not just for us, but for everyone who depends on them.”

Streamside replanting is the most urgent priority, though it’s only one part of the enormous logistical challenge of replacing so many trees in such a short period of time. In a normal year, we would expect to plant around 15 million seedlings across our Oregon timberlands. We will now need an additional 35 to 40 million seedlings over the next few years to replace all the trees lost in the fires.

That’s an extraordinary escalation, and it will require 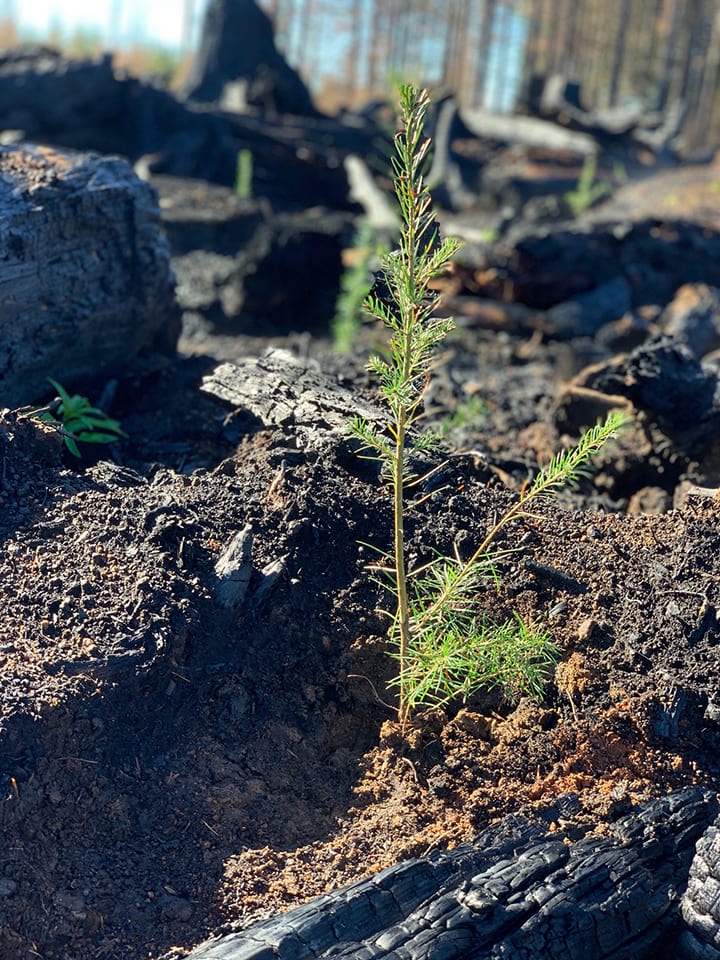 a huge mustering of people and resources — both immediately and long term — to manage expedited salvage logging, secure and distribute millions of seedlings, rebuild roads, bridges, culverts and other infrastructure, and ensure a reliable supply chain to coordinate and distribute all the necessary supplies.

The seedling component alone represents a massive undertaking: Where can you find a surplus stock of nearly 40 million seedlings? Part of the growing cycle includes our seed orchards and the nursery system, and it takes two years to get seedlings in our nurseries ready for planting. Our teams had to act immediately to start planning ahead for the demand shift, including delaying harvests in some areas so that those seedlings could be used to replant burned acres first.

“We’ve had to get really creative and innovative to solve these challenges,” says Steve Keniston, a region forester based in Oregon who’s been working on the recovery plan. “We’ve been partnering really closely with our internal nurseries to pull all the levers we can, including using some outside facilities, to find the additional seedlings we needed.”

At our seed orchard and nursery in Rochester, Washington, seedlings were ready to be packed and shipped to Oregon.

The people component is also significant. In a typical planting season, we might have eight or nine crews out on the affected areas in our Oregon timberlands to plant about 3 million trees. For this year, we’re planning to double that to 18 crews to replant around 8 million seedlings. We’ll nearly double that effort again in 2022, with the rest slated for 2023 and 2024.

Put in perspective, it took about seven years to complete the Mount St. Helens replanting, which involved around 18 million seedlings. So, it’s a much bigger job in Oregon, and we plan to do it in about half the time.

“It will require a coordinated and sustained effort across all of Western Timberlands to manage a recovery of this size,” Travis says, “and we’ve spent decades developing the people, partnerships and infrastructure in communities across Oregon and the Pacific Northwest to handle a job like this. We’ll get it done, and we’ll do it the right way.”

Speed and timing are critical in these early stages of recovery, including making sure to take advantage of as much of the fall planting season as possible. The best window is during wetter weather before snow impedes our work, as we want trees in the ground and growing as quickly as we can. By mid-October, in fact, only a few weeks after the fires had cooled, we already had a few crews out planting the first seedlings. The next wave began in December, and we’ll continue ramping up until every burned acre has a young forest taking root again.

“As painful as it is to walk through our burned forests, I can tell you there’s a real feeling of hope and optimism when you see those first seedlings in the ground,” Travis says. “You can’t help but feel a surge of pride and excitement. The forest will return and thrive again. We are all committed to seeing it through.”

In a New Video, Five Employees Share Their Passion for How We Contribute to Climate Solutions, Help Provide Sustainable Homes and Support Our Operating Communities

More Stories From Around Oregon

Early Prep, Rapid Response: Our teams are ready and on the lookout as fire season begins early in the Pacific Northwest

In late June, when temperatures across much of the Pacific Northwest soared to well over 100 degrees Fahrenheit, our Tim…

Restoring Oregon's forests: 'We’ll get it done, and we’ll do it the right way'

"The forest will return and thrive again. We are all committed to seeing it through."

Acts of kindness and Weyerhaeuser donations aid in wildfire recovery

Cara and Dana were driven to action after the Oregon wildfires. They consulted the Santiam Canyon Wildfire Relief Fund f…

When the skies turned from red back to blue and the ash stopped falling in September, the community of Molalla could fin…

Opening access: New agreement in Oregon is a win for communities, tribe, hunters and WY